Reporter tries out a Unicorn Frappuccino as its sale ends 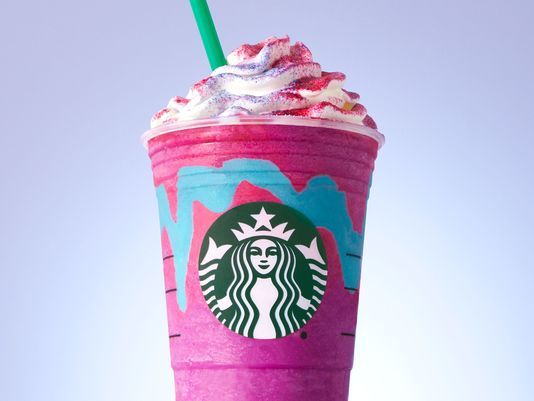 As the sale for the infamous Unicorn Frappuccino comes to a close, I decided to finally hop on the bandwagon and try the pink drink for myself. I got one of the last drinks in the Starbucks store. Shortly after I ordered, I noticed a “sold out” sign hanging over the unicorn on the menu.

After receiving my order, I eyed the drink dubiously. It was more of a magenta than the bright pink and blue on the sign, although maybe it had already been stirred. It was topped with whipped cream and neon-colored sprinkles. The color was off-putting, not what I would look for in a Frapuccino.

The Unicorn Frappuccino has gained lots of attention on social media, most of it negative. Celebrities like Katy Perry have made known their disgust at the drink, while others, such as Anthony Bourdain, have refused to even drink it.

Knowing this, I was prepared for the worst with my first sip. However, I was pleasantly surprised. It was strange, sure, but not bad. It was sweet and fruity with a permeating taste of mango.

I had practically finished the drink by the time I noticed the flavor change, and I wish I hadn’t. The sour assaulted my taste buds when I was least expecting it. It tasted nasty, like rotten milk, and left a horrible aftertaste on the back of my tongue. I tried to finish my drink, but after a few sips, it was too much for my stomach to handle.

I threw the rest of my drink, which was mostly whipped cream at this point, away with a grimace. The sweet majority of the drink had been enjoyable, but the sour at the end ruined the whole experience.

After cleansing my mouth of the lingering flavor, I came to the conclusion that although unicorns may be magical, this drink certainly isn’t.