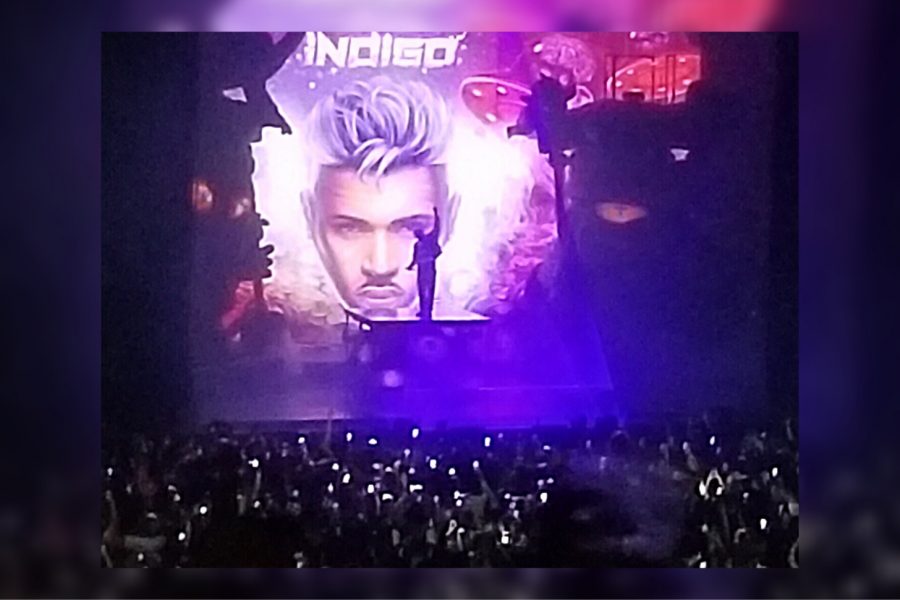 The visuals of the show added to the experience.

The lights cut off and the curtains are drawn. A strong heavy bass plays throughout the arena as the ground shakes. A silhouette appears in front of an indigo screen, and everyone starts to scream.

Many Bay Area locals went to Oracle Arena to experience a lively show from Chris Brown. The American singer, rapper and dancer performed his IndieGOAT Tour, featuring songs from his most recent album, “Indigo,”on Tuesday, Oct. 15.

The night began around 6:30 p.m. when Yella Beezy, a Texas-based rapper, kicked off the show. Beezy’s performance of his song “That’s on Me” brought life to the small audience, with many bopping to the music. Although the arena was not even half-full yet, his strong charisma and stage presence satisfied the early arrivals. Lucas’ performance also excited the arena and his song “I’m not a Racist” drew the audience to their seats.

Rapper and producer Ty Dolla $ign lured an even bigger crowd of people into the arena. His song “Saved,” a collaboration with Bay Area-based rapper E-40, who was there to rap his verse, had the arena pumped. The last opening act was artist Tory Lanez’s performance of his well-known song “Luv,” which had everyone singing along and ready for the main act.

It wasn’t until the lights were shut off and the beginning of “Indigo” started to play that the arena shook with the loudest screams and chants.

Chris Brown’s performance was stunning. From the start, the stage was filled with strobe lights and holograms, emphasizing his dancing. The 3-D renderings of Brown danced beside him, creating an illusion that they were actual dancers following his lead. These effects lit up the previously dull stage into a shining performance. The backdrop screen transitioned to a variety of interesting, futuristic visuals, giving the stage itself an out-of-this world vibe.

Brown’s strong start with his title track, “Indigo,” immediately established the energetic feel of the show. Brown’s constant dance breaks and talented backup dancers kept the performance exciting. Four of Brown’s female backup dancers had a small segment to themselves. Their performance brought just enough attention to them without taking away from Brown.

Brown also performed some of his older songs, such as “With You” and “Yo (excuse me miss)” from his previous albums. The fans seemed to love this segment as it was a throwback to the 2000s.

The night ended with Brown performing “No Guidance,” which brought fans together, singing the lyrics word-for-word, grooving to the music. Brown had his backup dancers hyping up the audience and showing off their best moves.

Chris Brown’s electric IndiGOAT Tour had almost everyone on their feet and wanting more from the skilled artist.