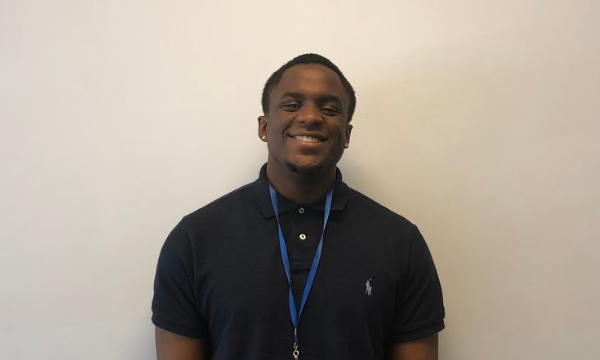 Waking up early, Chima Ikeme frantically rushes from San Jose to SCHS on an empty stomach to get ahead of the traffic. This is how he begins his each school day. Ikeme is a new teacher at SCHS who teaches World History and Psychology in three different classrooms.

Ikeme’s parents are Nigerian. His father immigrated to America in the 1980s, and his mother in the 1990s. Ikeme looks up to his father as a role model because of his honesty and respect towards other people.

Ikeme was born in San Jose and grew up in Gilroy with his family, older brother Jesse and younger brother Casey. Growing up, Ikeme was exceptionally close to his brothers who mostly kept to themselves, but in highschool, he branched out.

While a student at Gilroy High School, Ikeme found a passion in sports, such as basketball and track and field. His hobbies are playing a competitive game of NBA 2k on the weekends, or basketball. Basketball was a big part of Ikeme’s highschool experience. His team went to CSUD playoffs but were defeated by Belmont.

At University of California, Riverside Ikeme majored in education and completed a lot of community service at the highschools nearby. After graduating, he decided to become an educator in Social Science when he worked with various teachers at Overfelt High School.

Ikeme has a passion for history and declared a major in his sophomore year at UCS.

“Based on what perspective you look at history or events from the past, you can learn from them and connect them with things going on today,” Ikeme said.

In 2016, Ikeme graduated with a Bachelor of Science in administration and a Master of Art in teaching in 2019.

Ikeme said he usually starts his class by giving a short lecture and then allowing students time to work on their assignments, usually ending with a work exit ticket. Ikeme enjoys teaching students at SCHS.

“SCHS is great because all the students look like they come from different walks of life and they come together to support their school,” Ikeme said.