Juniors hope to ease the cost of nonverbal communication apps by creating their own: Talkerr 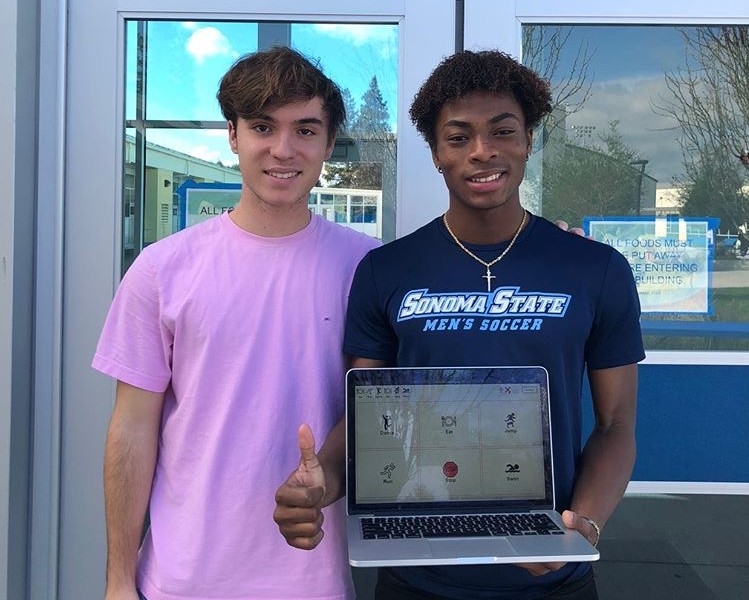 Arthur Tallet (left) and Tamba Mattia (right) pose with the online version of their app.

The cost of nonverbal communication apps can range from $100 to $500, some of which only offer bare minimum functions: help to talk to others. Juniors Arthur Tallet and Tamba Mattia decided to take the initiative to make an AAC – augmentative and alternative form of communication – app for those who cannot afford the price of current market apps.

“These apps cost about $400 per piece, and it’s kind of a rip-off considering how easy, to me, it would be to make and how simple the app is in its essence,” Tallet said.

Tallet and Mattia are working to launch a free AAC app called Talkerr App as an alternative, which will be available to everyone.

“It (the need for AAC apps) is something that people are taking advantage of with such a high market price,” Mattia said. “It’s unnecessary for you to pay 400 plus dollars to be able to utilize something such as speaking.”

Currently, there is only an online version of their Talkerr App, which is more of a pitch for people to test out. With the help of Michael Batrakov, a Junior at Mission Early College High School, Tallet was able to start coding the app during this past winter break.

Tallet and Mattia plan to have the app available on the Apple and Play stores in a few months. It will have various personalization features – letting users upload their own images for icons – along with custom color changes, many voice choices and icon arrangement.

April is Autism Awareness Month, so Tallet and Mattia will be hosting a fundraiser during that time. Their goal is to fundraise $5,000, with part of the profit set aside for the creation of Talkerr. The rest will be donated to organizations that help out disabled people.

During one of Tallet and Mattia’s meetings, the idea of an app came to mind. They knew they wanted to do something about pricey AAC apps ever since they were in seventh grade but only recently did they decide on starting a foundation and creating an app. Although they’re still working on their foundation, they plan to partner with other organizations and raise money to donate to institutions around the Bay Area dedicated to helping disabled people, such as the Morgan Autism Center. With their foundation and the Talkerr app, they hope to reach out to as many people who are in need of help.