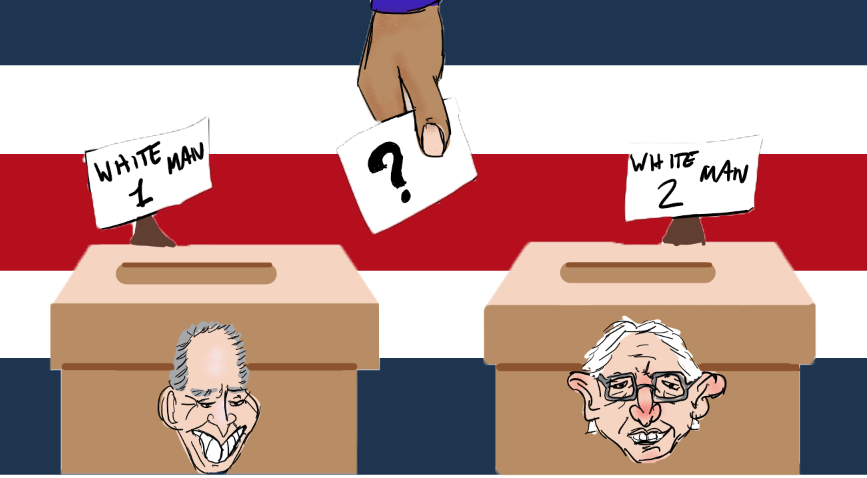 The current Democratic candidates are not representative of their voters.

After the Super Tuesday results rolled in, both Elizabeth Warren and Mike Bloomberg dropped out of the presidential race as Democratic candidates. Their decisions left Bernie Sanders and Joe Biden, two white cisgender males, to fight for the spot in the general election. Although Tulsi Gabbard is still in the race, her chances of being nominated for the Democratic Party are slim as she has not been winning any states in the primary election.

When the Democratic primary contest began in 2019, it featured one of the most diverse fields in history by race, gender and sexuality. The runners included six women of various races, two black senators, an Asian-American businessman, a gay mayor, and many more candidates of diverse backgrounds. However, now the race has become a fight between two not-so-diverse candidates.

The race and gender of presidential candidates are not determinants of their policies and character. Women and people of color want to be represented in the government. The final two candidates for the Democratic Party in the previous elections were Barack Obama and Hillary Clinton, respectively. They had vast amounts of support – albeit with different results – but they both presented a vision for a diverse future of America that is not seen in this year’s debate.

Race, gender and sexuality do not necessarily dictate how good, bad or effective a candidate will be as a president. A black lesbian woman could have the same vision and policies as a straight white guy, but the issue stands among the voters since people want to be represented in the media and government.

According to Business Insider, Warren stated after the announcement of her drop-out that “One of the hardest parts of this is all those…little girls who are gonna have to wait four more years.” The United States has never had a female president, and Warren dropping out follows the path of Hillary Clinton’s loss in the 2016 election.

Both of the current remaining candidates claim they want to focus on issues that affect all races, genders and sexualities to ensure a safe America, but they haven’t been in the shoes of these diverse people, so they cannot testify to those issues first-hand. Any hope that people of color and women had of seeing themselves in the Oval Office is now gone.

The race is still on and the candidates have different visions for citizens of different backgrounds. It is discouraging to see that only non-diverse candidates are left in the fight.