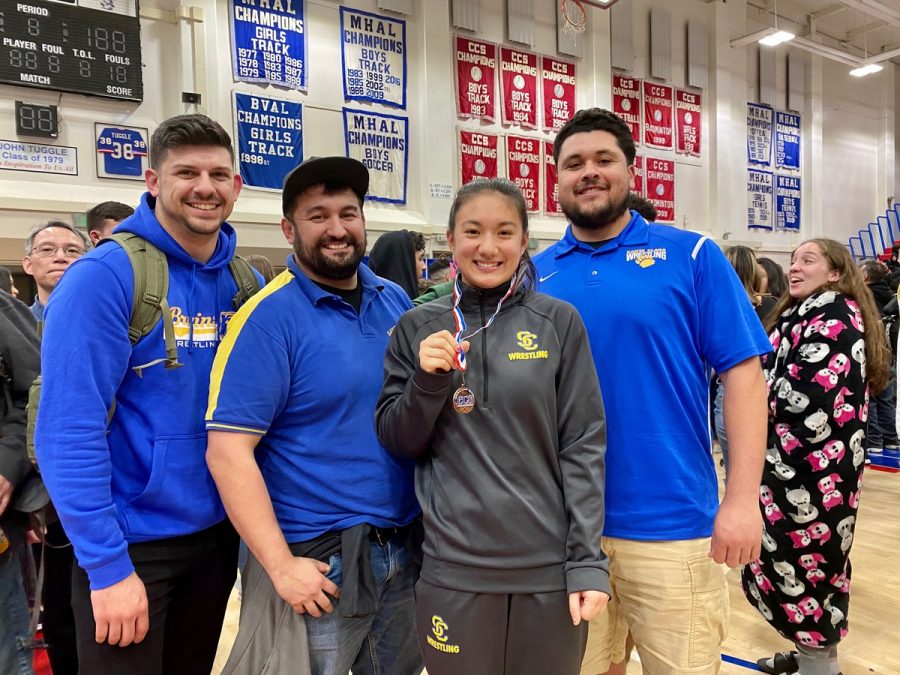 On Feb. 22 freshman Arwen Hirsch became the first female wrestler at SCHS to place in the Central Coast Section.

After a long day of matches, Hirsch placed 5th at CCS. According to Head coach Andrew Calderon, Hirsch was just two points away from going to State.

“I was a little shocked,” Hirsch said. “I didn’t really take it in as kind of a big deal as (being) a role model for girls or just representing our school in wrestling so it was pretty cool.”

During her first few matches at the two-day CCS tournament, Hirsch said she felt nervous, but relied on her muscle memory to push through.

“Throughout the second day I was more confident,” Hirsch said. “My last two matches determined if I placed or not so my coaches were pushing me to just focus and relax.”

Hirsch started wrestling in eighth grade after one of her friends encouraged her to try the sport.

“I wrestled last year in eighth grade at Buchser Middle School…I ended up loving it, just the whole sport,” Hirsch said. “And then this year I found out that they (SCHS) had it, so I tried out and I loved it.”

In addition to wrestling, Hirsch is a swimmer, which helped her gain the necessary athleticism to place at CCS.

“She is a really strong athlete overall,” Calderon said. “It shows on matches, whenever her opponent faces her, she locks in with them, you can see that they are kind of intimated by her strength.”

Hirsch’s love for wrestling grew exponentially this season. She hopes other girls and athletes will try out the sport and see what wrestling is all about.

“It is a really tough sport but it really teaches you teamwork and endurance and pushing through things and knowing your limits,” Hirsch said.