REVIEW: Jeremy Zucker’s debut album ‘love is not dying’ is an exciting advancement in his music career 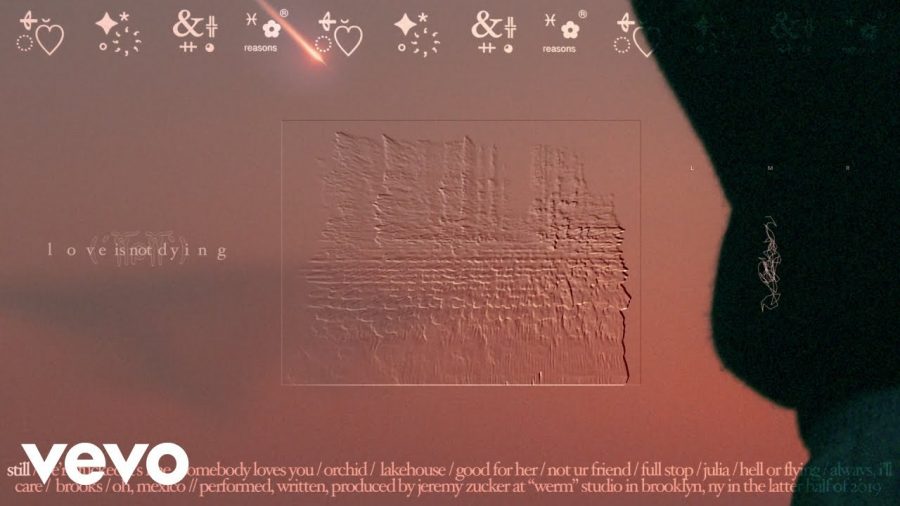 With over 15 million monthly listeners on Spotify, it’s surprising to think that Jeremy Zucker only released his debut album “love is not dying” on Friday, Apr. 17, after years’ worth of hit singles like 2018’s “comethru.” Despite the artist’s massive fanbase, Zucker’s 15-track record remains true to his roots, yielding a dynamic listening experience that shifts from chilled verses to powerful choruses on a moment’s notice.

“love is not dying” perfectly captures the melodramatics and uncertainty of modern youth, epitomized on the album’s lead-off track, “still,” in which a female voice jokes about doing ASMR. According to Zucker, the conversation and sounds for “still” were naturally sampled, and the song’s beauty lies in a sort of relatable casualness; it’s a snapshot from the artist’s life.

“Everything was moving so fast and everything was so hectic, and this person was like, ‘I just wish we could be still,’ and that phrase really stuck with me,” Zucker said in an interview with Apple Music.

The album quickly transitions into songs like “orchid” that seamlessly blend soft-spoken vocals with thunderous lyrics of regret, showcasing a valuable quality in Zucker’s music: it’s never static. Songs on “love is not dying” are constantly evolving and hold entirely different tones by the time they end. For instance, on “oh, mexico,” what initially sounds like a soft breakup ballad turns to a distorted arrangement of electric piano. Equally unpredictable is the reflective spoken word verse presented to listeners on “brooks.”

“I swear I feel older, these days, I’m not feelin’ myself / And I’m feelin’ ashamed ‘cause I probably need help,” Zucker sings.

The jewel of “love is not dying” is “full stop,” which playfully copies the tune of “not ur friend” for its intro, and describes the crashing feeling after a person removes somebody from their life. As Zucker describes it, the song is “random and weird and nonsensical,” which proves to be a positive.

“We could both lie in the sitting sun / I’ll be on my way before we’re done,” Zucker sings in the outro.

Though the record is arguably Zucker’s best work so far, the album’s major flaw is that it’s only 43 minutes long, and most of that time is comprised of songs from his previous EPs titled “bonus tracks” as well as previously-released singles. Still, with “love is not dying” being Zucker’s first album ever released, there’s only the possibility of improvement.