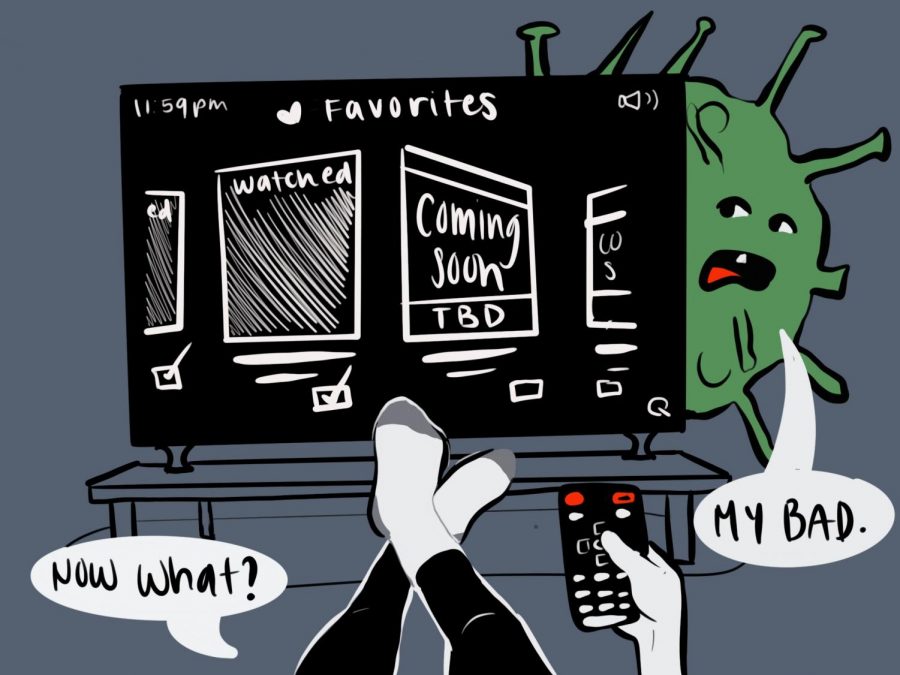 Many shows have been cancelled or postponed due to Coronavirus.

The production and release of many television shows and movies have been put on hold due to the coronavirus pandemic. Some of those postponed were favorites among numerous SCHS students.

According to Teenvogue.com, the filming of new seasons for several popular teen shows like HBO’s “Euphoria,” Netflix’s “Stranger Things,” and CW’s “Riverdale” has been delayed. Junior Setareh Rahimpour is a fan of a few shows that have been postponed and while she is saddened by the delay, she also feels it is necessary.

“Although I’m pretty sad that these shows are getting postponed and I won’t have much to watch during quarantine, I think it’s most important for the cast members of my favorite shows to stay safe,” Rahimpour said.

Variety.com reported this is the case for many television studios, such as Warner Bros, Hulu, Amazon and Fox. Disney has also postponed the production and release of numerous of their shows and films, including the highly anticipated live-action remake of “Mulan.” Senior Jessica Kuang was looking forward to watching “Mulan” in theaters.

“I am quite disappointed that the release date could potentially be pushed back to a year from now,” Kuang said.

While Disney does not intend to release the remake of “Mulan” on streaming platforms, many films will be available to stream. According to Newsweek.com, a movie is usually available to stream seven months after its theater release date. However, Vanityfair.com reported many have been available a lot earlier on streaming platforms due to the pandemic, including top box office movies like “Birds of Prey” and “Onward.”

“I think that is a great idea. Since we are not allowed to go to the movie theater and watch the movie there, we can watch it online,” sophomore Kiara Plaza said. “I love that.”

Senior Ezekiel Basilio believes airing new movies straight on streaming platforms is a smart decision business-wise since it gives an advantage for companies to make money off people staying at home. However, he finds it less exclusive because this means that leaks and illegal streaming are going to be more easily accessible.

“While I don’t think it’s that good of an idea to release new movies during this time, if they do it, they do it. If they don’t, they don’t,” Basilio said. “It’s not my loss of profits anyways.”

Though many students feel disappointed, they believe the delay in upcoming entertainment is necessary for safety amidst the pandemic.

“Production includes a lot of people within close quarters, which isn’t good social distancing, so if it takes postponing to have social distance, then so be it,” Basilio said.