OPINION: The ‘murder hornets’ that have swept the world are a distraction from more urgent news 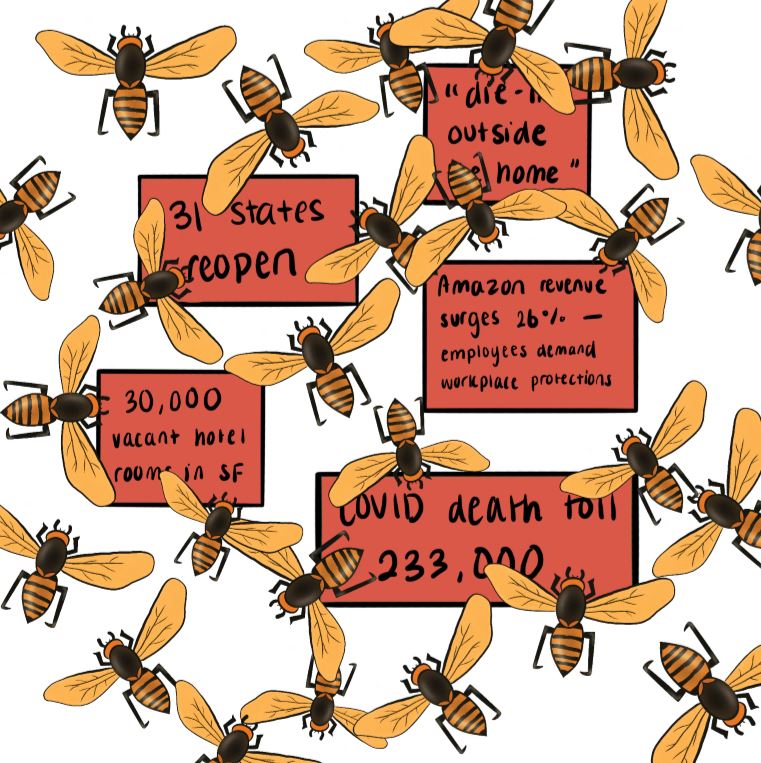 News of these hornets arrived in early May.

News of the Asian giant hornet has surfaced ever since their unexpected migration to North America. The useless “buzz” that has come from their arrival has blindsided Americans from the serious news that doesn’t concern these hornets and less aware of the pertinent matters happening around them.

For example, earlier in May when the unusual spotting of these hornets was first announced, so was the announcement of 31 states to reopen some non-essential businesses. Criticisms came from both sides as the world-wide death toll had topped 233 thousand, not including those who died outside of hospitals or weren’t tested. The likeness of the hornets doing damage similar to COVID is very low, especially when compared with their mere 50 reported deaths since their initial spotting in early April.

The Thursday after the hornets’ emergence at the White House, President Donald Trump attempted to downplay the U.S. toll, which is still the highest in the world. Trump contradicted his administration’s top intelligence officials saying he has “seen strong evidence that the novel coronavirus emerged from a laboratory in Wuhan China” and followed the claim with no evidence at all. Following Trump’s statements, the Director of National Intelligence issued a rare public announcement summarizing that the intelligence community also concurs with the wide scientific consensus that the COVID-19 virus was not man-made or genetically modified.

That same week, medical students and doctors with the UC San Francisco Do No Harm Coalition staged a “die-in outside the home” protest. Mayor London Breed protested the refusal to swiftly move the homeless and other unhoused citizens into hotel rooms. The protest lasted thirty minutes to symbolize the 30,000 vacant hotel rooms in the city. They also held a moment of silence for three unhoused people in SF who have died of COVID-19.

Across the U.S., employees of Amazon and Whole Foods are walking off the job and calling in sick to demand workplace protections. Protestors painted a mural outside a mansion owned by Jeff Bezos, the founder of Amazon and the richest man in the world. Amazon reported raised revenues surging up 26 percent in three months of the year to more than $75 billion as millions of homebound Americans under quarantine placed orders. Amazon, as a result, ended unlimited unpaid time off for its workers who will have to choose between returning to the job or getting fired and possibly becoming ineligible for unemployment benefits.

The hornets’ ability to divert attention from what is going on around Americans is the most intriguing aspect of it all. Quarantine has left a majority of the country stranded in their houses far away from these hornets. These Japanese hornets should be the farthest thing from Americans’ minds when thousands of people are dying each day from a much riskier cause.