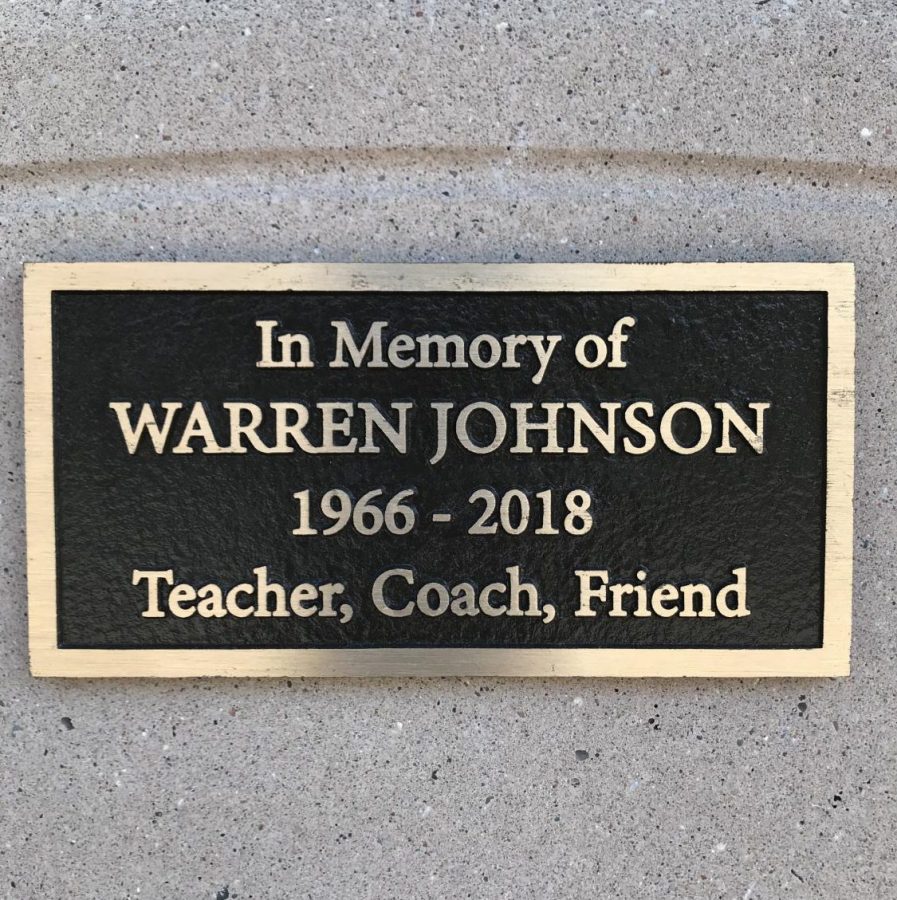 Johnson's memorial can be found next to SCHS' Health classroom.

Two years after his passing, former SCHS physical education teacher Warren Johnson’s memorial was completed on Sept. 8. The memorial was intended to be completed in March 2020, but the COVID-19 outbreak delayed all construction.

Plans for a memorial next to the Health classroom were originally pitched by P.E. teacher Julie Kawamoto not long after Johnson’s passing in early September 2018.

“The area was not an attractive spot, so fixing it up for the whole school to enjoy was our goal,” Kawamoto said.

After the decision was made, months went by without progress. During this time, the P.E. department decided to build an interim memorial out of flowers and rocks.

“I thought it was really cool that there are things on the memorial that students and staff had made in honor of Mr. Johnson,” Johnson’s former student and current SCHS P.E. and English teacher Cory Morbo said. “He was always a positive, up-beat, friendly person. And when I was a teenager, I could always talk to him about stuff, and he never wouldn’t have the time to listen.”

After a year without an official start to the permanent memorial, the P.E. department decided to take matters into their own hands. The department reached out to multiple sources and was aided by its Teacher on Special Assignment Angie Scott, SCUSD board member Vickie Fairfield, Superintendent Stella Kemp and an anonymous donor. After this effort, the memorial was underway.

“He was not only a teacher at SC for 20 years, but he was also a coach, mentor and friend,” Kawamoto said. “He taught and coached thousands of kids in the community, and there was no better way of memorializing him than having a place dedicated to him that alumni and current students can go to to reminisce about him and the joy he brought to work everyday.”

The memorial also means a lot to many SCHS students, who believe preserving his memory is imperative.

“I think it is important to pass on his story as who he was as a teacher and person to those who didn’t have the chance to meet him,” Johnson’s former student, senior Isabelle Villarreal said. “Mr. Johnson was definitely one of the staff members on campus that helped shape me into the person I am today. Freshman year, I was quiet and reserved. Because of Mr. Johnson, I am now constantly talking and meeting new people without fear.”

Johnson’s passing has left many students and staff members heartbroken. The memorial is a place where Johnson’s legacy can be celebrated and passed on for generations to come.

“The P.E. department is going to have a little hole for a little while,” Morbo said. “It’s so hard to do him justice.”