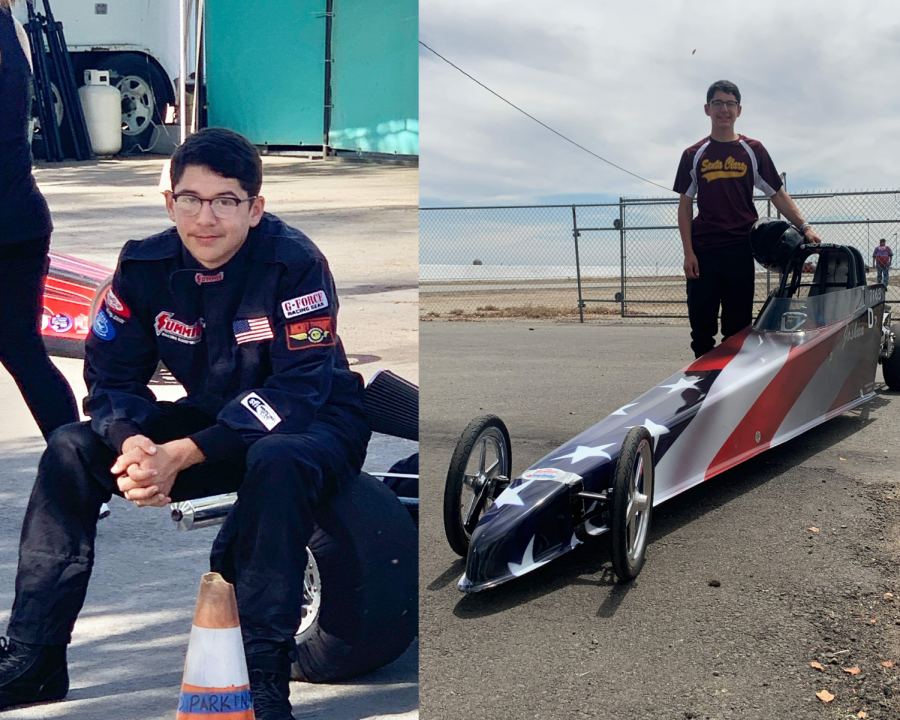 Josh DeSousa has been racing since 2018 and has been to Las Vegas for his competitions every year since. Racers can customize their cars, and Josh DeSousa chose to don the American flag on his.

When senior Josh DeSousa visited the Redding Dragstrip with his uncle in 2017, he found a new passion in dragster racing. Since age 15, Josh DeSousa has been a junior dragster at drag strips in Redding, Sonoma, Sacramento and Bakersfield.

“When I first started, I was thinking, ‘I’ll just finish this year, and then we can stop,’” Josh DeSousa said. “But then I fell in love with it, and I just like going now.”

Junior dragsters can begin racing as young as age six and compete with half-scale cars: smaller versions of the adult dragster cars. According to the Junior Dragster Racing League, these cars can travel up to 85 mph.

A typical race involves pulling the car to the starting line and running its engine so the tires can warm up, Josh DeSousa said in an email. Then, a set of lights turn to green and the racers take off, ensuring their speed is consistent as their cars travel the eighth of a mile drag strip. The first car to pass the finish line with a constant speed that does not exceed the maximum speed wins.

Josh DeSousa said that being a junior dragster has given him confidence and a passion to develop his skill.

“I wanted to be active, do something,” Josh DeSousa said.

At the beginning of DeSousa’s journey he was not so successful.

“When he first started he lost always to the girls. The girls are always very intimidating and very good,” Josh’s mother Annette DeSousa said.

After his initial intimidation, Josh DeSousa found his confidence.

“Vegas is usually a really big deal, so to go is like a once-in-a-lifetime type of thing,” Josh’s mother Annette DeSousa said. “You usually have all the best racers there, and celebrities.”

In the beginning of 2020, Josh DeSousa qualified for the Las Vegas competition, representing the Sonoma Drag Strip. He went on to beat out Autumn Hight, the granddaughter of John Force, a famous racecar driver.

Outside of the glamour of racing and competing, the practices and expenses can be plentiful.
Junior dragsters must purchase their own car and travel to designated drag strips to compete and practice on specialized tracks. New dragster cars cost around $5,000, with a membership fee of $34 a year, according to the Junior Dragster Racing League, and with additional safety features, the price increases.

“Every couple of years they have to update the helmet and the harness to make sure it doesn’t wear out (and that) you’re not wearing old stuff,” Annette DeSousa said. “It’s a huge thing, and that’s what makes it really expensive.”

Despite these expenses, Annette DeSousa said she is proud her son has found a passion that makes him unique.

“(He is) like the only kid at school that’s doing something different than sports or theater or music. This is different,” Annette DeSousa said. “You’ve got to be proud of it.”