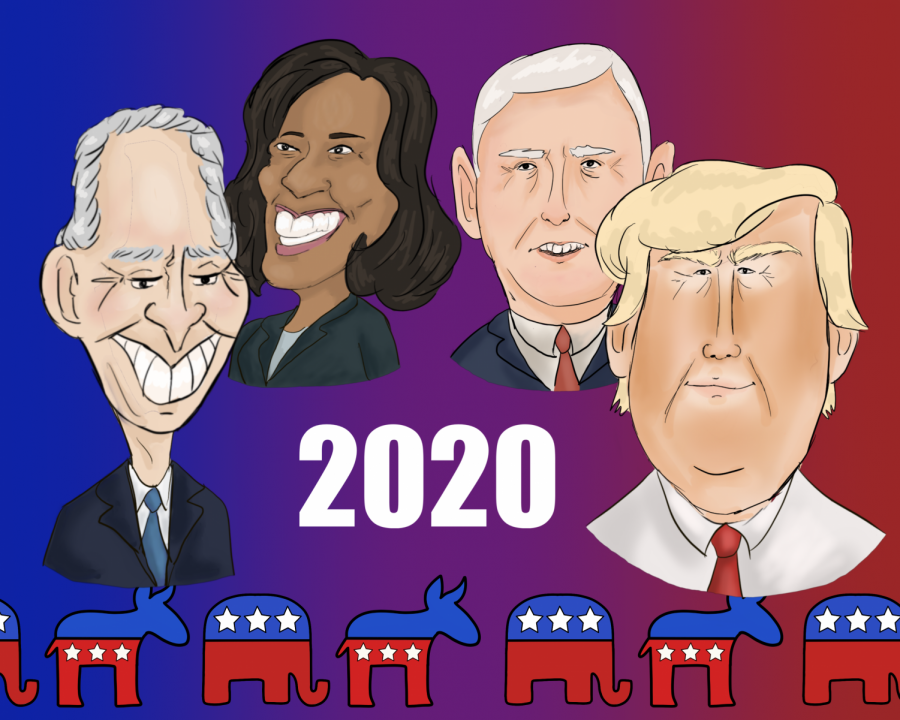 As the 2020 presidential election draws to a close, some members of the SCHS community are on the edges of their seats. In the midst of the COVID-19 pandemic and a resurgence in the Black Lives Matter movement, the 2020 election has been far from traditional. According to the U.S. Elections Project, more than 53 million Americans had cast their ballots by Oct. 23, aided by the expansion of early voting. On Nov. 3, millions across the country will cast their votes while maintaining social distance.

For Gen-Z, this election is pivotal, as many are old enough to vote for the first time, according to freshman Diya Desai. She believes the outcome of this election will shape this generation’s approach to addressing issues such as climate change and the coronavirus.

“I feel like this election is one of the most important elections of our lifetime. And I know we say this a lot, but I’m feeling somewhat excited and scared at the same time because, like I said before, it’s important and you don’t know how it’s going to turn out,” Desai said. “But, I can only hope for the best.”

“I think we’ve seen that (polarization) for a while now… so I do think there’s less of a middle ground,” Schmale said. “There’s less people who are undecided or who are not sure, and then I think you have a lot of vocal people on the extremes.”

Senior Pradeep Kundu is among the conservatives who critique President Trump. Kundu values strict finance, supporting the military and most importantly, freedom. He feels that Trump has failed as a Republican leader to act according to the party’s core values.

“Trump says that he is a conservative and that he fights for the working people. I really doubt that…” Kundu said. “He has spent so much money. His spending policy in terms of the government has been astronomical… It’s not very conservative.”

Unlike Kundu, conservative-leaning sophomore Zach Mechlin believes President Trump would be more likely to improve the economy than former Vice President Joe Biden. However he recognizes certain advantages that Biden holds over his opponent. For instance, Mechlin feels that Biden’s growing popularity and general support within the media is a contrast to the singular support within Trump’s base.

“He (Biden) obviously has the aspect of the media following him and also the people, so he could probably influence the masses a lot better,” Mechlin said. “I do not think he would improve the economy as much as Trump could.”

While senior Chelsea Paez, a Democrat, is wary of both candidates’ personal track records, she views Trump’s immaturity and underhanded attacks, particularly during the first presidential debate, as unacceptable. Paez hopes that if Biden is elected, he will restore America as a country of equal opportunity.

“I think that Joe Biden also supports what I believe. I don’t think that people should be excluded just because of the color of their skin because they don’t have enough money,” Paez said. “I think that at least with him, we will get further with Women’s Rights, LGBTQ+ Rights.”

Similarly, Kundu is skeptical of Trump’s ability to heal the country and properly address systemic racism.

“Right now we’re going through a racial awakening on what society is. The fact of the matter is that he (Trump) used the military against people in Washington D.C. so that he could have a photo op with the Bible in front of a church. And using the word of God as a political opportunity, I think that that’s disgusting,” Kundu said. “I don’t know how he will protect our civil liberty.”

Despite his shortcomings, Kundu believes that Biden is the “lesser of two evils.” Kundu, who has a strong dislike for Biden, maintains hope in his abilities to solve certain prominent issues, namely the COVID-19 pandemic.

“Biden will probably become president, and I really want him to take care of the COVID situation,” Kundu said. “But anything big or new, I don’t really see that from him – he’s a Washington insider.”

Paez and Kundu may have differing political alignments, but they can both agree that Biden is better prepared to bring the spread of the coronavirus under control.

“Joe Biden’s taking more of an approach where he’s like, ‘I’m going to listen to the scientists because what they’re saying is more accurate than my personal knowledge,’” Paez said. “And so, I think looking forward in terms of the future, I feel like Biden’s approach would be more reliable, and it would take us further in terms of ending the pandemic.”

Desai agrees. She believes Biden’s work on the Affordable Care Act during the Obama administration and personal losses allow him to empathize with other Americans.

“Biden has an actual COVID-19 response plan, recovery and relief plan. It allows for at least 10 testing centers in every state and makes sure that the government should mandate wearing masks,” Desai said. “He also has a plan to give 18.6 million people jobs. This will help everyone.”

Desai also believes in the power of voting. She is ecstatic about the millions of newly registered voters who are utilizing their right to vote.

“After looking at the results of the 2016 election, I think many people realized just how important their votes are, which they are,” Desai said. “We have so much power, and I really hope that we use it.”

Social science teacher Pilar Svendsen shares similar views. She has observed the surge in voters this election firsthand. Svendsen was shocked to hear about her sister, someone who had not voted in a majority of previous elections, submitting her own ballot.

“It’s so important to vote and I’m surprised by how many people who didn’t vote in the past are voting now, and I think it’s because of the state of our country at this point,” Svendsen said.

She emphasizes the importance of an educated vote and recommends websites such as ballotpedia.org and everychildmatters.org for young voters to educate themselves prior to voting on key measures that will potentially impact millions. Both Schmale and Svendsen highlight the significance of local politics in addition to the national and state elections.

“I think a lot of people get stuck on the presidential election and forget about all the other things that are on the ballot right now that are just as important if not more so,” Schmale said. “I would argue that city council and school district measures have more impact on our day-to-day life.”

Svendsen also believes there is an assumption that Californians’ votes do not matter because the vote almost always goes blue. According to Svendsen, however, California is historically a red state, and it was not until the election of Bill Clinton in 1992 that it switched. Thus, Svendsen believes it is important that all Americans exercise their right to vote, regardless of their political alignment.

“I hope that people recognize the power in the collectiveness of our voices and how we as a people can make a difference if we partake in the democratic process,” Svendsen said. “So that’s my advice: to become informed, go out and vote, and take it seriously and value it.”