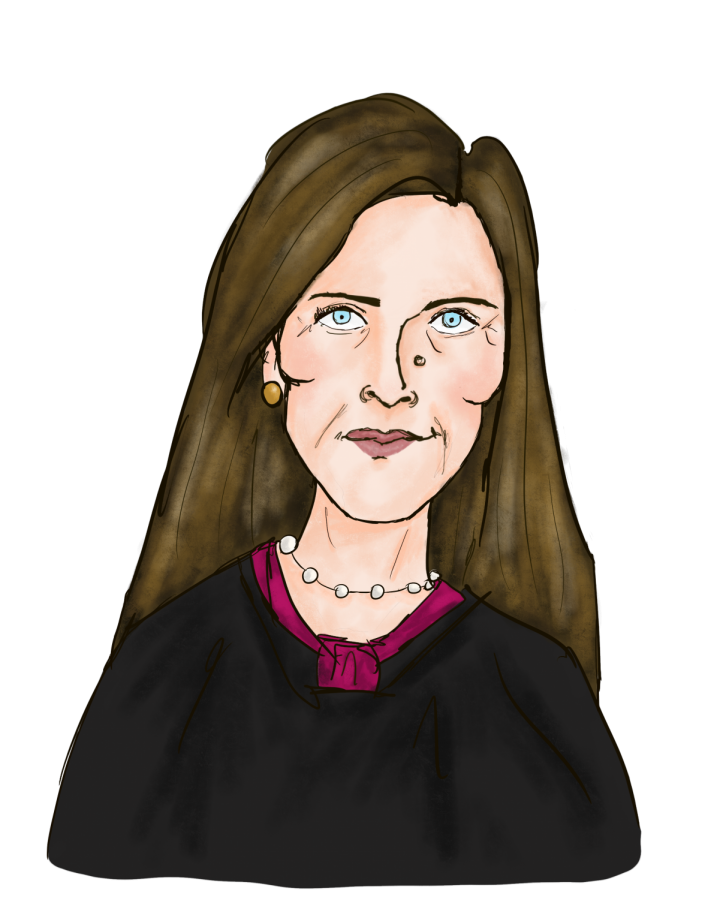 Yet even with a prestigious education and a successful career, Justice Barrett has been a topic of discussions among both the political turmoil in Washington and members of the SCHS community. She is seen by many as a conservative judge picked by the Trump administration to undo the work of Justice Ginsburg.

“Many people saw it as a slap in the face to Ginsburg’s memory that someone so opposite to her was chosen as her replacement,” English teacher Sara Silverman said.

Many critics describe Justice Barrett and Justice Ginsburg as opposites. According to junior Lorenzo Beronilla, Ginsburg played a large role in securing LGBTQ+ rights during the Obama administration while Barret does not have the same attitude toward transgender rights.

“I see them both as avid feminists, but in very different ways,” Beronilla said. “Amy Coney Barret believes strictly in equal rights, but not the same way Ruth Bader Ginsburg does. The comparisons kind of end there.”

Throughout the years, Justice Barrett has held a strong stance against abortion. She signed her name on numerous newspaper ads against the practice. In 2012, she signed a letter opposing Obama’s mandate on contraception, which required health insurers to cover costs for birth control.

It is also known that Justice Barrett is a devout Catholic. It is unknown, however, whether she would follow her personal beliefs in her decision-making. During her time on the Circuit Court of Appeals, a U.S. Federal Court, she imposed restrictions on abortion, held an expansive view on gun rights and allowed the death penalty on such felonies, maintaining a conservative record. Although, some claim that her tenure was too brief to determine any consistency in her ruling.

Her confirmation for the Supreme Court occurred a hasty four weeks after the passing of Justice Ginsburg. During this, the actions of Senate Majority Leader Mitch McConnell were criticized as he broke the precedent that Supreme Court Justices should not be nominated so close to a Presidential election.

“It was hypocritical, particularly McConnell, who stalled a Supreme Court Justice during the last administration because he said it shouldn’t be decided so close to an election,” Silverman said. “They absolutely pushed it through in order to get it done before the change of power occurred.”

The controversy also brought about the divide within the senate among party lines. During the senate vote, every Republican except one voted yes, while every Democrat voted no, thus becoming the most politically divided in over a century. Many, including Beronilla, now view the Supreme Court as another political tool for leverage in their respective agendas.

“I hope that in the future, it doesn’t become a political institution because it is the Supreme Court of the United States,” said Beronilla. “I feel that if the appointments of justices can be seen as less dividing and there can be some consistency around the etiquette and policy of appointing one, I think it definitely can become more of a central and neutral institution because it’s supposed to reflect the law.”

Two of the anticipated topics in discussion with this shift in the Supreme Court are Abortion and Health Care. One of the reasons the Trump administration nominated Justice Barrett was to undo the Obama-era policy, as it is one of the President’s promises. Earlier the court ruled to uphold Obamacare, and a conservative in Barrett would be the move to overturn it. These cases could affect people in the SCHS community.

“In some facets of our life we are going to be affected,” said Beronilla.  “Let’s say if they overturn Medicare, then that could impact a lot of students who are on Medicare who don’t have private insurance.

Beronilla adds that if Judge Barrett’s appointment results in a ban in abortion, students who potentially could require an abortion will not be able to do so which could lead to black market abortions or other dangerous options.

Yet the future of the Supreme Court’s institution is uncertain, and anything is likely to happen. Silverman recalls President Einsenhower’s appointment of conservative Judge Earl Warren 1954.

“He (Judge Earl Warren) was nominated by Eisenhower as a conservative pick for the Supreme Court, and completely flipped, and became one of the most liberal judges ever” she said. “It says on President Einsenhower deathbed, he said one of his greatest regrets was nominating Warren.”

With this in mind, it is unknown how Justice Barrett will affect the Supreme Court’s rulings. Only time will tell.