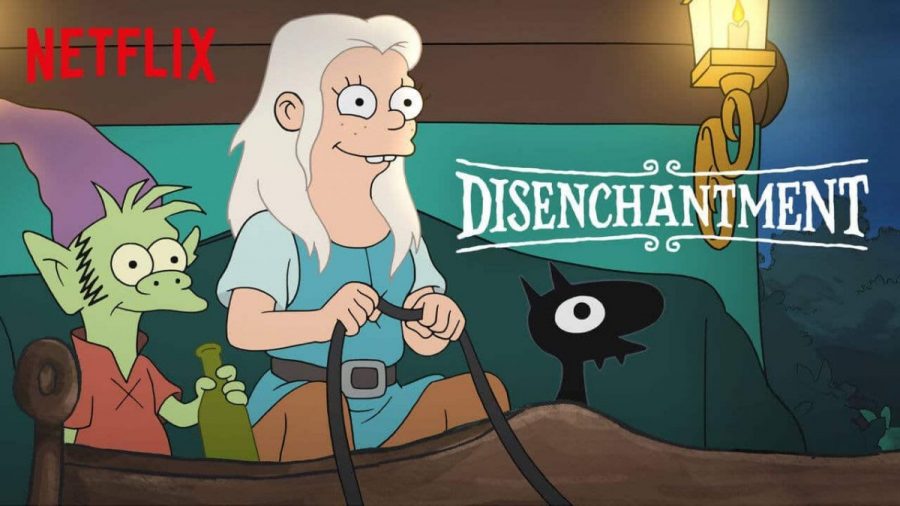 Matt Groening already has a seemingly unlimited amount of creative shows. However, on Friday, Jan. 15, he added yet another addition to his collection: Season 3 of the hit show “Disenchantment.” The critically-acclaimed Netflix show broadens its horizons with a new, ambitious season to enrich the nature of the show while delivering a humorous experience filled with wittiness, mystery and fantasy.

The animated show, of which the first season was released on Aug. 17, 2018, has three parts to it, each part consisting of ten 30-minute episodes filled to the brim with laughter.

“Disenchantment” follows Princess Tiabeanie of Dreamland and her two friends, Elfo and Luci, a demon and an elf, respectively. The comically mismatched team of “misfits” are depicted throughout their adventures in the fantasy kingdom of Dreamland, which is plagued by poverty,  a king with anger issues, and a castle brimming with secrets. The fantasy world is truly exciting as Season 3 pushes the boundaries of storytelling with multiple new kingdoms and lands.

Season 3 began with an exciting premise, where the viewer must follow along with two episodes of endless plot twists, suspenseful espionage, and witty humor to fully understand what is going on, even if they watched the prior seasons extensively.

The new season not only answered the many fan-created theories and mysteries of the show but also created new ones. This increased viewer engagement enriched the storyline – every new episode brings more suspense and mystery, leading viewers to fall in love with the characters and the story.

Viewers will find themselves laughing at Matt Groening’s typical witty production, the comedic relief of the miserable kingdom and its satirically barbaric nature. The writers do a great job portraying the misery of a medieval kingdom stuck in the ages of cruelty and feudalism, which in itself is a delightful political commentary of the ignorance of the masses. The show has a great modern tie-in to recent political events and portrays modern events in a hidden medieval fashion that tackles issues such as racism, xenophobia and sexism.

Additionally, Princess Tiabeanie is revealed to be bisexual in Season 3, alongside the reveal of multiple same-sex relationships. Whilst Tiabeanie’s sexuality surprised no one, it is great to be able to have a multi-dimensional LGBTQ+ character whose defining trait is not their sexuality.

Some elements of “Disenchantment,” however, do not make sense: characters are coming back to life, and some seem to have completely rejected any character arcs set for them in prior seasons, alongside the use of unrealistic gimmicks as cheap comedic relief. This does not overshadow the more creative elements of the show, but it may confuse viewers by adding premises that have no means of progressing the story.

The third season of “Disenchantment” is a great one, to say the least. From brilliant writing, incredibly funny jokes, talented viewer engagement, cascading and suspenseful storylines, the medieval take on modern events, and its diverse cast and set-list, “Disenchantment” is a show for anyone looking to sit back, relax and fall in love with the wonderful kingdom of Dreamland.