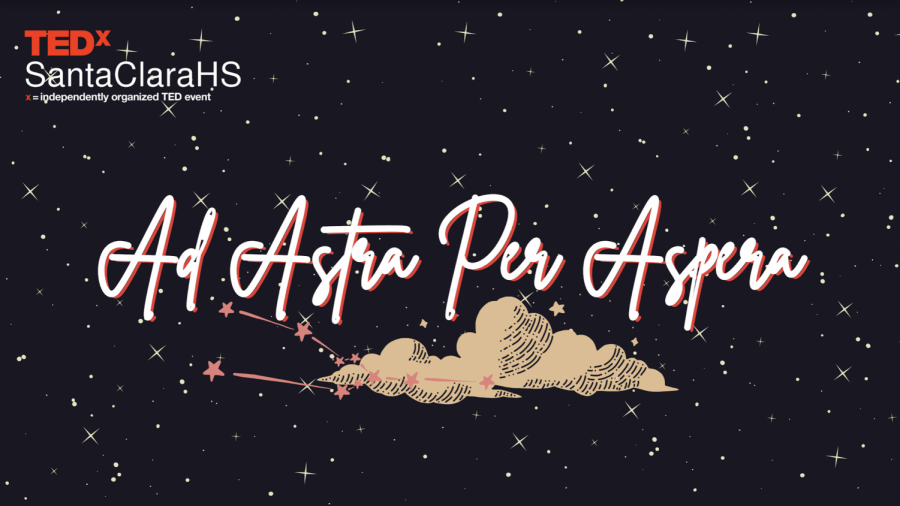 The event's theme “Ad Astra Per Aspera” translates to “Through Hardships to the Stars.”

Seniors Vy Ho, Trish Le, Jennifer Liu and Pradeep Kundu sit down in front of their computers, nerves going crazy. They open the Zoom Webinar and begin the event they’ve been planning since July.

Those four seniors planned and hosted the TEDxSantaClaraHS event on Saturday, Feb. 13. The Korean Vegan, Nithila Poongovan, Saurav Gandhi, and Medha Kini all spoke at the event. The event was held to amplify the voices of the SCHS community.

The idea to host a TED event first came after Le realized that many people in the SCHS community had begun using social media to amplify their voices.

“I saw a lot of our peers on social media. They started using this online platform as a voice to amplify their own stories,” Le said. “I was kind of inspired by all of these stories, and all of these things are happening.”

Le and Ho then worked to submit their application to get a license to hold an official TEDx event. The theme they came up with for the event was “Ad Astra Per Aspera,” which translates to “Through Hardships to the Stars.”

“This pandemic has brought upon a lot of hardships for so many of us. Being confined at home during the pandemic has pushed us and our peers to find new creative outlets to platform to spread ideas and share opinions,” Le said. “We were inspired by how they (the community) literally pushed through these hardships to aim for the stars, and because of that, our theme was centered around amplifying their voices and was intended to bring a sense of solidarity and hope for all of us.”

Junior Saurav Gandhi spoke at the event with intention of spreading the word about the project he’s involved in, The African Library Project.

“I thought it would be a really good opportunity to sort of give the projects that I’m working on more exposure and to try something new during this pandemic,” Gandhi said.

Liu said that the team had a lot of technical difficulties while doing rehearsals and that they struggled with some of the options while using Zoom Webinar.

“I haven’t used the webinar settings before, so the biggest issue we ran into was trying to figure out how speakers can share their screens. We thought that was it only the host could share because we forgot that there was an option where you can give sharing to participants, to the panelists too,” Liu said.

According to Le, the event was very successful, and over 100 people submitted an RSVP. In the future, the TEDx committee is aiming to pass on their legacy to future committees at SCHS. They hope to continue this tradition in the years to come.

“I want to have a new board application out so that for the current freshmen, sophomores and juniors to take over. When I’m in college next year, I’ll still be trying to mentor,” Le said

Le said that overall, she hopes the audience was able to gain important skills and a new perspective on those skills. She aimed to give them an inspiring takeaway by hosting the event.

“Our local community got a chance to hear about some topics brought to light and sparked discussion with each other – intrigued themselves in new perspectives unheard of,” Le said. “I hope we gave them some kind of inspiration or courage to do these amazing things on their own, or know that they’re capable of doing great things that they want to do.”