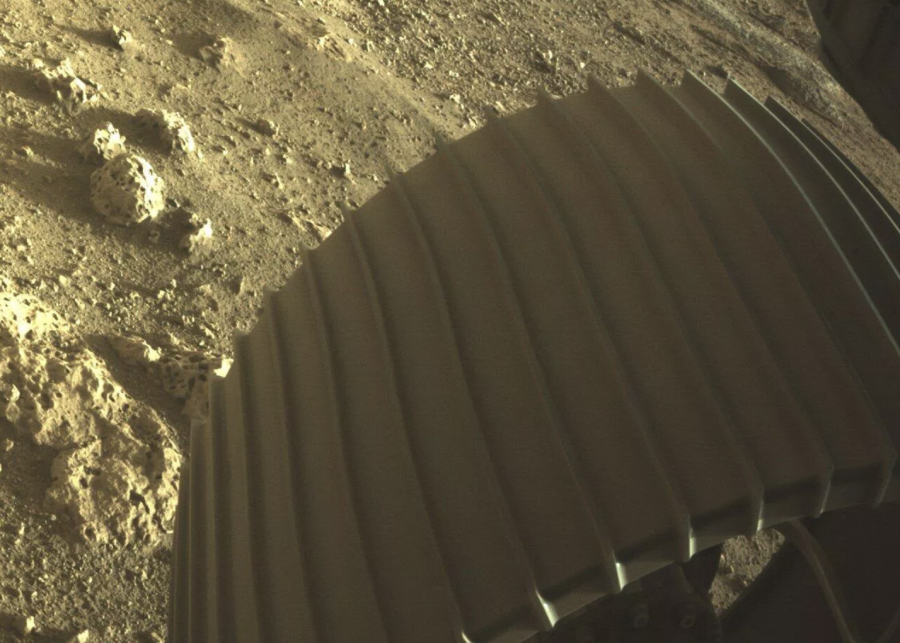 A shot of the ground taken by Perseverance can be seen.

When senior Corey Lisemby watched as NASA successfully landed the Perseverance Rover on Mars on Feb. 18, 2021, he was filled with elation and excitement as the most advanced rover set foot on the red planet.

“I knew before it launched that it would be a monumental achievement, but it was nothing like what I expected,” Lisemby said. “Hearing ‘touchdown confirmed’ was rather somber given the circumstances the world has found itself in, but at the same time, incredibly exciting and a great reminder that we can get through any obstacle as long as we focus and work hard.”

The rover’s mission is to explore the large Jezero crater, which could hold evidence of former life on Mars.

“Jezero Crater is suspected to have once been a lake,” Lisemby said. “When you look at images of it, you can see a dried delta being fed by rivers on one side while on the other, there is a canyon that could have been carved by erosion during periods of flooding. That delta is filled with clay, a key indicator that water was there.”

One of the rover’s many gadgets is its robotic arm, where it can extract and store material, such as soil samples, from the Martian ground. NASA has already hinted of a mission where the samples will be transported back to Earth where they can be studied.

“This will be the first time that soil samples have ever been brought back to Earth from Mars,” physics teacher Ian Martin-Fodor said. “I’m really curious to hear about what they find. Biological molecules or remnants of biological molecules might indicate something was alive. ”

The follow-up endeavor collecting the Martian soil would help scientists determine if Mars ever had life. Martin-Fodor believes that Perseverance will be able to answer more of that question.

“I think everyone’s wondering, ‘Was there ever life on Mars?’” Martin-Fodor said. “I think Perseverance will help us to get a big step further towards determining yes or no. They’re either going to find some kind of evidence that points in that direction, or they’re not.”

Along with its robotic arm, the rover has many enhanced features designed by its manufacturer Jet Propulsion Laboratory (JPL) to assist its exploration. This includes multiple spectrometers, panoramic cameras and a wireless rotor-powered vehicle called Ingenuity.

“Ingenuity is by far my favorite new addition as it is something that we’ve never attempted before,” Lisemby said. “NASA referred to Ingenuity as a ‘Wright brothers moment’ as it is the first time we have attempted to fly on another planet, proving once and for all flying there is feasible.”

Another new apparatus that tests whether human life could exist on Mars is called MOXIE, Mars Oxygen In-Situ Resource Utilization Experiment, and was launched as a technology demonstrator on the Perseverance rover.

“MOXIE seeks to break down carbon dioxide in Mars’s atmosphere to create pure oxygen,” Lisemby said. “This ultimately allows us to determine the practicality of establishing a sustaining environment for humans on the planet.”

With many of these gadgets and enhancements, there is also added mass. The Perseverance is 1,000 kilograms, more massive than any of its predecessors, and uses far more energy to conduct its operations. However, Martin-Fodor believes it will persist, describing the changes implemented from the hardships faced by its predecessor, the Curiosity.

“Perseverance adopted nuclear energy as its source instead of solar since the solar panels on Curiosity were affected by dust storms,” he said.

With other upgrades, such as updated wheels, Martin-Fodor believes that the Perseverance will be a reliable pioneer in the exploration of the red planet.

“I’m really optimistic about its durability considering that Curiosity lasted way longer than they thought it was going to or when they originally planned,” Martin-Fodor said. “I’m hopeful that this one can last for years and years to come.”