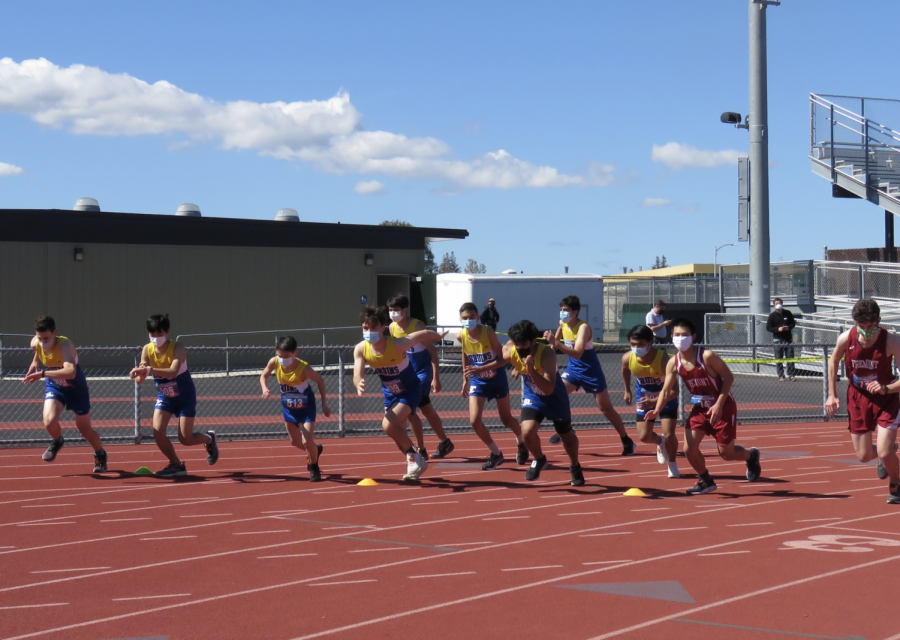 Members of the SCHS and Fremont cross country teams begin to race.

After being delayed until the second semester, sports are in full swing. Season one sports – girls golf, girls tennis, swim and cross county – are currently competing, while Season two sports – football and soccer – begin competition this week.

The three seasons have been greatly condensed in order to give all sports the greatest chance of a season. Many safety precautions such as mask-wearing and social distancing have been implemented to keep coaches and athletes safe. According to SCHS athletic director Anthony McGilvery, when checking in and out of practice, all participants must scan a QR code that takes them to a short survey of health-related questions.

For sophomore cross country athlete Noel Cevallos, the safety measures and health survey are fair requirements. Cevallos missed competing with his teammates and is glad to have a season.

“Even with these precautions, I still have had a fun season,” Cevallos said. “To me, the QR code feels the same as a roll call and is an understandable precaution for the district to take if they need to contact trace.”

Many traditional cross country courses are not available to run on this year, and meets are mostly being held on Saturdays as opposed to weekdays. Hosted by various high schools, only two teams compete at a time in coed races instead of the typical multi-team meets with races separated into Varsity and JV, and girls and boys, according to McGilvery.

“The goal is to reduce the amount of contact as logistically as possible,” McGilvery said. “When cross country has a big meet on a Saturday, you get two schools and come and finish and then two more come and finish … to limit cross-contamination.”

Paperwork is virtual this year as well, with all athletes required to submit their physical and other information required to play a sport through athleticclearance.com. McGilvery said this new system has streamlined the process, as the athletic directors can easily clear athletes for practice, or notify them if there is a mistake on their paperwork.

According to golf coach Kevin Vannest, social distancing is essentially built in for his team as golf is an individual sport. This year, SCHS no longer has a coed golf team, with the creation of a girls team – the first in Vannest’s 12 years of coaching at the school. During practice and matches, the players wear masks at all times.

“They have their own equipment, so they don’t have to share equipment. We usually exchange score cards, like people keeping score for other people,” Vannest said. “We’re not doing that this year and sometimes they would have alternates, so you would have more people out on the course than just a six on a team.”

Girls tennis takes similar safety precautions, sophomore Hrishita Malhotra said. She and her teammates are provided with gloves to wear when picking up the tennis balls.

According to McGilvery, the girls tennis team is considerably smaller this year, as the season began while Santa Clara County was in the Purple Tier, and most athletes chose not to play. The team initially had difficulty beginning competition since they could not get to games at other schools without district buses.

“Our girls tennis program normally has about 25 to 30 girls each year split between the two teams: Varsity and JV,” McGilvery said. “We’ve only got five girls doing tennis right now.”

For Malhotra, who had not played tennis competitively before this year, the season was an opportunity to combat boredom.

“I was bored and I was looking for something new … the more I thought about it, the more I considered it,” Malhotra said.

Swim is another sport with decreased participation, with approximately only half of last year’s athletes. For some swimmers, there was difficulty choosing between their club and SCHS, as they cannot be part of two cohorts simultaneously, according to head swim coach Nicole Young. The team was split into a Varsity cohort and a JV cohort when the season began on Feb. 1, allowing most swimmers a lane to themselves in the pool.

“What we do is any lanes that have two swimmers, they start on opposite ends of the pool so the two swimmers will never be stopped on the same wall together,” Young said. “And their masks are on until right before they jump in the water, and then when they get out of the water, the first thing they need to do is dry their faces off and put their mask back on.”

More so than other sports, the swim team has experienced a dramatic change in their competitions – the meets are virtual.

“This year each team competes at their home pool, so we never see the other teams,” Young said. “Also we don’t have parents on deck this year as timers. The coaches we’re doing all the timing.”

The virtual aspect of swim meets has upsides, some feel, as the team will be competing in a pentathlon against six other schools on Wednesday, March 17.

“It’s just something new and something fun we’re trying this year just because of the situation,” Young said.

Season one ends in late March, while Season two begins competition this week. Limited numbers of spectators have only recently become allowed for some sports now that Santa Clara County has dropped to the Red Tier, according to the March 9 Bruin Country Principal’s Update. McGilvery encourages students to come out for sports this year, and Young shares a similar sentiment.

“It’s just really nice to be out on the deck having some other socialization than the people that we live with,” Young said.