Students take the SAT on campus behind plexiglass and masks 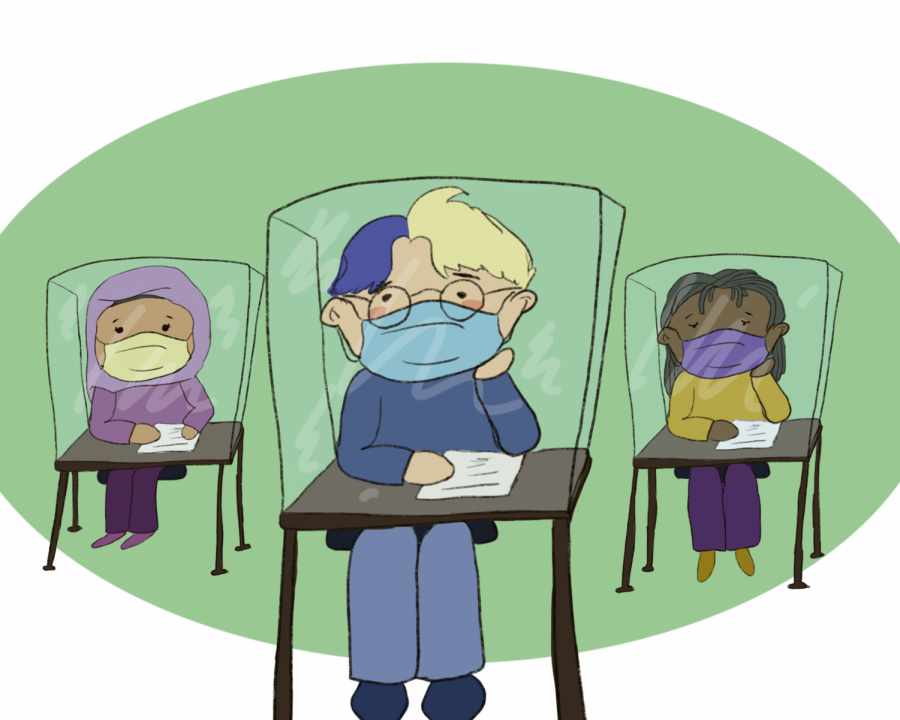 CDC guidelines were maintained as students tested on campus.

This year, the SAT was not required for juniors, but they could opt in to take the exam at SCHS on March 24, and many did. According to Vice Principal of Activities, Communication and Facilities Erin Brown, 107 students took the test in-person on the designated day.

With COVID still raging, most UCs and CSUs are test-optional for next year’s round of applicants. However, students opted to take the SAT for numerous reasons.

For junior Madelyn Hidalgo, the exam was not a source of stress but, rather, a way to be prepared for the college process.

“Since most colleges will be test-optional for applications next year, I tried not to stress too much about it,” Hidalgo said. “I looked at it as a way to get a feel for whether or not I would be interested in submitting my scores when I apply next year.”

Others, like junior Anishka Bhartiya, opted to take the SAT to bolster their future college applications.

“Since many colleges are test-optional, I know many students have decided to not take any standardized test – SAT or ACT – so I felt if I submitted a score, I would have an advantage,” Bhartiya said.

COVID has helped some who are taking the exam in more ways than just standing out on applications. Bhartiya found that because of COVID restrictions, she had to alter her studying plan but saved immense amounts of money as a result.

“I bought a Princeton Review prep book from Amazon and studied through that and Khan Academy,” Bhartiya said. “Because of COVID and my inability to go to professional tutoring places like Zenith, I saved thousands of dollars prepping for the SAT.”

For junior Naomi Smith, studying for the exam was not very intense.

“I actually did not actively study for the SAT. Yes, I did a little review of math terms and processes, but besides that, I didn’t cram too much,” Smith said. “The SAT isn’t truly an intelligence test. It’s about how good you are at taking the SAT, reading the questions correctly, and understanding the question format.”

Regardless of how a student studied, the testing situation was vastly different this year. According to Vice Principal of Attendance, Technology, and Discipline Nelson Hori, SCHS took extra precautions to ensure student safety and follow CDC guidelines. Since hybrid learning had not started yet when the exam took place, all classrooms, as well as the small gym, were viable places to test, meaning students could be spread out easily.

For some students, returning on campus was strange, even if just for a few hours. Aside from the surrealness of the situation, many felt the process was streamlined.

“It was a pretty weird feeling being back at school,” Hidalgo said. “The process was pretty easy. They sent out each student’s test locations beforehand, which made everything go smoothly.”

Even though there were more students in the small gym, those who tested there, like Bhartiya, found the safety precautions to be up-to-par.

“When I learned that I was taking the SAT in the small gym, I was apprehensive that it would be too crowded,” Bhartiya said. “However, I was pleasantly surprised when I saw that tables were more than 6 feet apart and each student had their own table.”

In the smaller classrooms as well, safety was of the utmost importance.

“In the classroom, there were about 10 other students. We all had masks on as well as plexiglass folders around each of the desks, which were all spaced out,” Smith said. “Overall, the COVID guidelines were not hard to follow because everything was so spaced out, organized and clearly labeled.”

Although COVID has posed challenges in other areas, many students felt that the SAT ran smoothly. Smith said testing in a smaller classroom of 10 to12 students actually provided somewhat of an advantage.

“With the SAT during COVID, there was no huge timer. We were in rooms of less than a dozen people, and if you had a question, you could get the attention of the test proctor and get it answered much quicker than in the PSAT, which had a dozen or so staff spread thin amongst 300 sophomores,” Smith said. “When I took the PSAT as a sophomore, everyone was crammed into the main gym, and the stress and tension was so thick I felt like I could cut through it.”