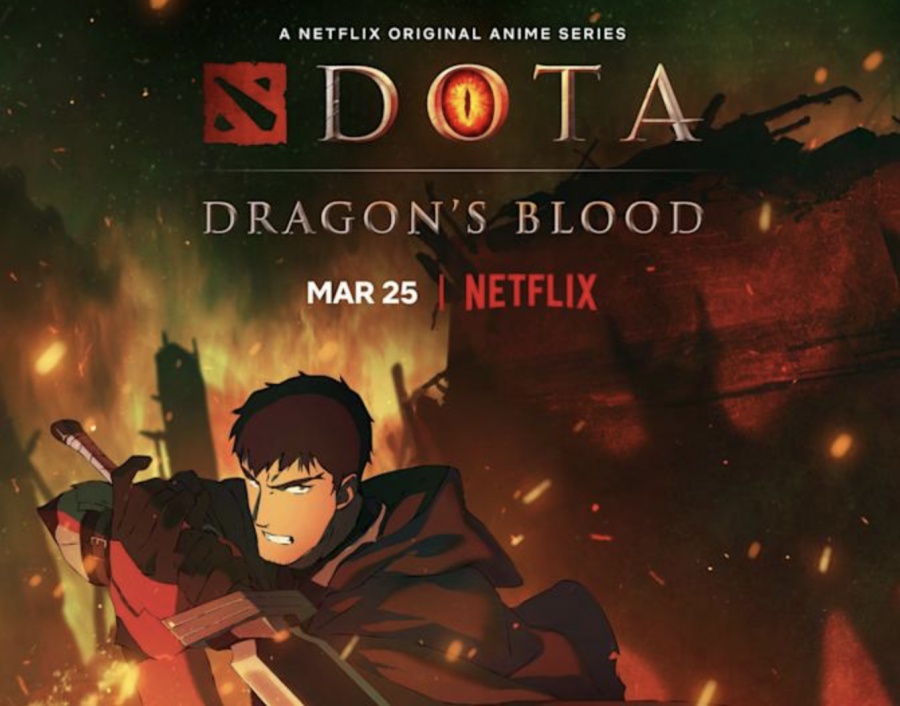 On March 25, 2021, Netflix’s “Dota: Dragon’s Blood” was released. The fantasy action animated show is based on the highly successful multiplayer strategy video game “Dota 2,” developed by Valve. As a disclaimer, the show does have some blood, gore and swearing, which may upset some viewers.

The story follows Davion, a Dragon Knight who ends up awakening to a power he does not understand, and Mirana, a princess trying to regain her throne. The story does not sound very unique on paper, and for the most part, it is fairly generic; however, the way the protagonist’s journey is portrayed is quite entertaining. Most of the characters are fairly likable and enjoyable to watch. Davion can be thought of as the brash and somewhat stereotypical fantasy protagonist but is realistic in the way he thinks, and he can be exceedingly funny at times. Miriana, in contrast, is extremely serious but is also brutally honest and sarcastic with everyone, which leads to some great banter between the two leads.

The art and animation are polished, with beautifully rendered character designs and backgrounds. The fight scenes are well illustrated and choreographed, though many of them seem choppy at times, with robotic movement. Additionally, there are very noticeable CGI or 3D animated models, used for most of the dragons and some people in the background, which does not blend well with the otherwise 2D scenes. For the most part, the animation is well done.

The voice acting is phenomenal with talented voice actors, such as Yuri Lowenthal, Troy Baker and others, who do a great job portraying each of their characters. Their voices fit their characters’ personalities, making most of the emotional moments even stronger.

The majority of the issues with the series have to do with world-building. The show does most of its world-building through monologues, which can be annoying and repetitive. It also forces the viewer to remember many names of gods and other beings in order to understand the lore, which is not inherently awful, but having to remember everything can be cumbersome.

Another negative to the show is the attempts at displaying moral grayness. While many of the characters are pleasant, not all are. The show desperately tries to make the audience feel bad for some of the villains, but it does not do a good job making them sympathetic characters. Ultimately, there is no sadness when a villain gets what they deserve.

While “Dota: Dragon’s Blood” has many qualities holding it back from true greatness, it does have a lot of delightful elements, such as some of the main characters and the epic fight scenes. It can still be an enjoyable watch, so if the flaws can be ignored, viewers experience a worthwhile show.