CAMPUS: COVID-19 restrictions both aid and hinder the process of earning a driver’s license 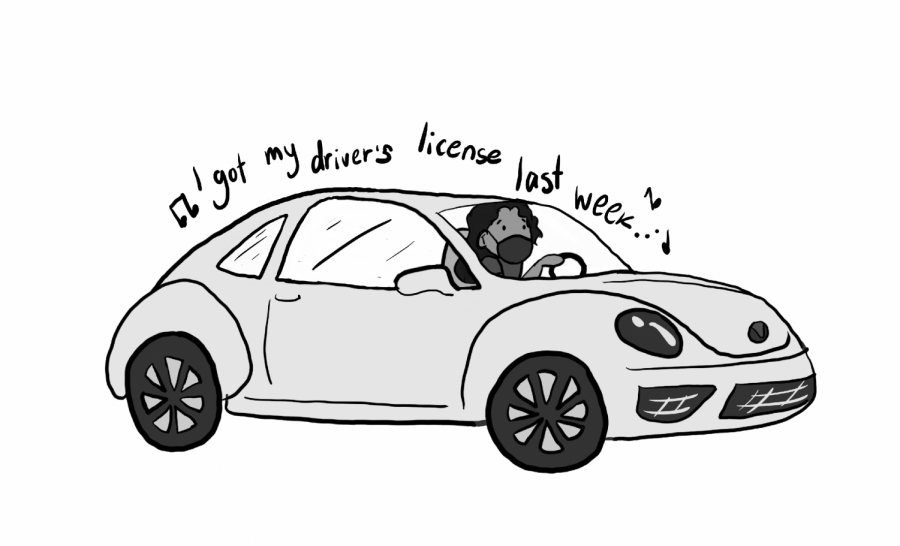 After waiting outside for an hour, a 16 year old straps on their mask and enters the DMV with a hopeful spark inside them. Two hours later, the doors open and they walk across the parking lot grinning after receiving their driver’s license.

As the pandemic continues, some SCHS students have utilized the extra time that accompanies being at home to learn how to drive. Those trying to get their license during the pandemic, however, have struggled to secure DMV appointments for their permit and behind-the-wheel tests, as well as lessons.

Junior Cole McColloch went to the Santa Clara DMV for his test, where COVID-19 protocols exacerbated what would have been an already tedious experience. With extra screening and temperature checks, the notoriously slow task of going to the DMV was lengthened.

“It’s not just, ‘Okay, yeah, you get in the car.’ It’s, ‘All the windows have to be down. You put this seat cover on the seat next to you,’” Doane said. “I had my hair down when I took my test, so then my hair was blowing in my face because the windows had to be down.”

Senior Rayana Ysabelle Palacios took private driving lessons and said there were not many safety requirements.

“The only thing that really changed was the fact that we both had to wear masks the whole time, and the driving instructor sanitized the driver seat and everything that the driver would touch,” Palacios said.

Some students have found that the lack of other events during the past year has aided in their efforts.

“Because of the fact that we spent all this time alone and to ourselves, I was a little bit too bored, so I was like, ‘You know, I am just going to finish Driver’s Ed,’ which pushed me to get my permit,” Palacios said.

Some students were able to prepare better in advance for their upcoming tests.

“COVID definitely granted me more time to study for the test. For some people I know, it means they couldn’t get their permit, but I finished everything in January, so then I was all ready to go,” McColloch said. “I just needed to practice, and I had all the time in the world to practice.”

Along with the push to complete the testing processes, driving itself can be easier during the pandemic, according to Doane.

“For me, it’s (driving) a lot easier because there’s not very many people on the road, so it’s not as stressful,” Doane said.

Even with the struggles and stress that come with earning a license, some students have grown to love and appreciate driving as a hobby and a way to relieve stress during the pandemic.

“I really like driving, especially since there aren’t very many cars on the road. I can kind of just go drive,” Doane said. “It doesn’t feel like a chore. It actually feels peaceful for me.”

“I would definitely say regardless of the pandemic, getting my license helped me mentally because it’s also that sense of freedom that you get,” Palacios said. “You get a step closer to independence.”