FOCUS: Many are worried about the environment of California’s west coast as threats continue to rise 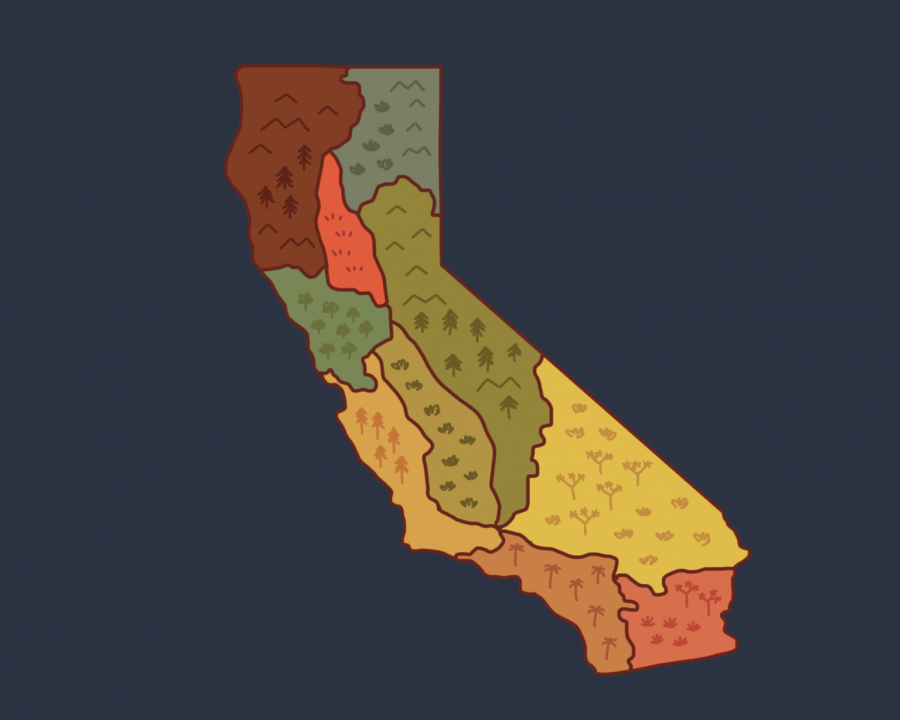 After the recent SCU Complex wildfire in the Bay Area, much was left destroyed, including the  venerated Big Basin Redwoods State Park. This imminent threat of danger has left many concerned, including junior Vivek Atmuri, the founder of the SCHS Youth Climate Action club.

“Wildfires are a main culprit to the decline of our ecosystem,” Atmuri said. “These trees take a millennia to grow, and acres of them have been destroyed.”

California has one of the most diverse ecosystems on the planet. The state encompasses deserts, alpine mountains, chaparral, redwood forests and more natural marvels.

“You could drive to Tahoe and be in the snow one day, and then a couple hours later be by the beach,” science teacher Sara Carvalho said. “Its (California’s) diversity is right up there with places like the Mediterranean and South Africa.”

California’s ecosystem, however, has been under attack from extreme wildfires to ocean acidification. The fabled redwood forests are starting to decline as a result of climate change. Other unique ecosystems, such as the world-famous Mojave Desert, are also experiencing extreme temperatures. The vast and unexpected changes have many, like Carvalho, worried.

“Over on the Santa Cruz Mountain side, we’ve lost redwood forests,” Carvalho said. “Redwood forests take thousands of years to build, and that’s not coming back in our lifetimes to the point where it was right now.”

Carvalho added that fires are beneficial to an extent to the redwood trees; however, they must be controlled with caution to potential disaster.

“The problem is that climate change is making those fires really, really big and really, really hot and really damaging,” Carvalho said. “If we followed what the native people of California know, which is to have small fires that are controlled, we wouldn’t necessarily be in the situation that we’re in right now. We are exacerbating that by driving climate change as well, so the redwood forests are not going to have a chance to recover.”

According to the Washington Post, the redwoods house a cool and moist biome supporting variants of flora, birds and mammals. Over the past century and a half, redwood forests have lost 600,000 of their 2.2 million acres. The threats of climate change in California are not only looming on land, but also in the coastal ecosystems.

According to National Geographic, kelp forests are invaluable to California’s overall climate. Not only do they serve as a refuge to sea otters, gray whales, and other species, they store immense amounts of greenhouse gases, reducing them from the atmosphere. In between 2014 and 2016, a marine heat wave wiped out 90% of kelp forests, creating a drastic threat which could cripple its biodiversity.

With the destruction of their habitats, many animals would be nearly eradicated from existing, creating a chain reaction that will result in the loss of biodiversity. Science teacher Lizzy Estes highlights the importance of keystone species in an environment.

“Keystone is like an arch essentially – think rock arch – and if you take away that top center brick in that arch, it all falls,” Estes said. “It’s essential and critical for a healthy and stable ecosystem.”

One keystone species in California’s oceans is the sunflower starfish, the main predator to the purple sea urchin, which feeds on kelp. With its environment on the brink of collapse, the starfish was nearly eradicated, causing an explosion of the urchin population, which will cause further destruction of the kelp forests.

The unique biomes in California are all connected. The end of one habitat could lead to the failure of another. For example, the Sierra Nevada mountain range needs annual snowfall.

“If there’s no snowfall, there’s no run off, which causes drought in the lower valleys, and it’s just a cascading effect across the whole state,” Estes said.

In turn, California’s Mojave Desert has great attractions, such as the Joshua Tree and Death Valley’s dunes. Despite its warm weather, climate change has also affected its ecosystem.

“I think that climate change does not affect the desert is a big misconception,” Atmuri said. “With wildfires destroying acres of Joshua tree forests and the drought reducing vegetation for animals such as tortoises to feed on, climate change is just as looming as a threat in the Mojave Desert as anywhere else.”

The Mojave Desert is an extremely vulnerable area of California as it is already difficult for organisms to survive in the region. According to the Los Angeles Times, water sources in the region are degrading, and as a result, killing off organisms in the area, such as the aviary population. Scientists estimate that in 2021, there are nearly three billion less birds than there were in the 1970s. Without these birds, insect populations are growing and killing off the already futile amounts of vegetation in the Mojave.

Moreover, the desert’s natural habitat has been crippled by irrigation farms. Agriculture is one of the largest industries in California, and it is one of the main producers of greenhouse gases. California has millions of acres of farmland throughout the Central Valley. Carvalho said that one detrimental substance the farms use are massive amounts of fertilizer.

“The fertilizer uses a lot of pesticides and herbicides, which contains a lot of nitrogen,” Carvalho said. “That nitrogen can end up in our water system, which can cause adverse effects in humans.”

A great many factors, from extreme weather to ecological cataclysms, are leading to the destruction of the once-beautiful environment of California. Yet there is still hope. According to Diego Arguedas Ortiz, an environmental expert for the BBC, simply transitioning from fossil fuels to green energy, changing buying habits, going car-free and changing one’s eating habits can make a huge difference. If every human in a developed country would simply start caring enough to change their habits, climate change can be combated, not only on the West Coast but in the entire world.