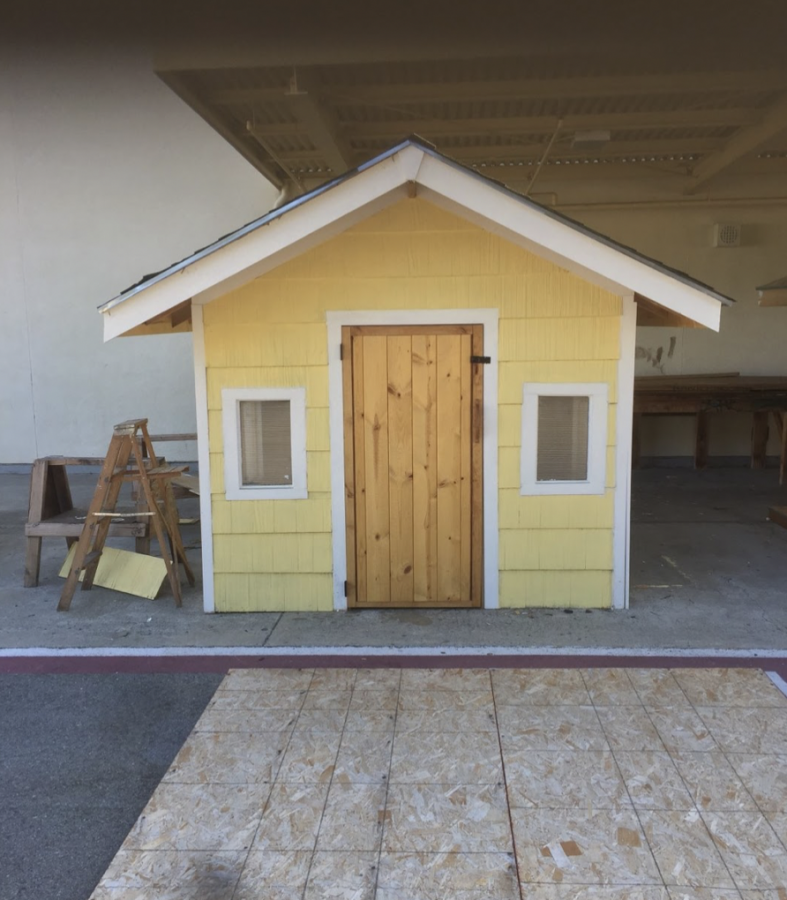 During a typical school year, Construction students would build projects such as wooden sheds.

During a typical school year, the SCHS Construction 1 and Construction 2 classes are hard at work using machinery to build projects. The distance learning format, however, has posed a challenge for the hands-on classes.

Construction classes spent the first semester learning and reviewing rules for building and how to use tools correctly, among other non-kinesthetic information. With a $5,000 donation from Home Depot, Construction teacher Mitchell Posey was able to provide students with tools and materials so they could build at home this semester.

“Construction 1 is primarily probably 65 to 70% hands-on building projects. And so, I thought, ‘What can I do to enable them to build things at home when they don’t have any tools or equipment?’” Posey said. “So what I did is I was able to get in contact with corporate people at Home Depot and some local people, too, who were a tremendous help.”

Each construction student received the opportunity to pick up a bucket of hand tools from SCHS in January 2021. Whenever Posey assigns a new project, he provides wood and specific materials. Furthermore, the physical projects are optional this year, as Posey understands not all students are able to build at home.

“Some of the kids live in an apartment complex with no back patio, no front patio, no garage. And yeah, they can go in their bedroom, but they have to have an area to build on. If they have a nice desk, you don’t want to do it on the desk,” Posey said. “That’s why I provide an alternative project for them to do so that it is fair.”

Typically, Construction 1 students make seven to eight smaller projects while Construction 2 students learn how to build structures, such as sheds and dog houses.

“Last year, we were in the process of constructing sheds that would model home building techniques,” Construction 2 student senior Asa Cortes said. “Then, of course, the pandemic hit, and we were not able to complete the projects, but we continued to learn how to do it.”

After SCHS switched to distance learning, then-junior Cortes was able to use the skills Posey taught him to design and construct a wooden shed for his grandmother. He decided to take Construction 2 again this year, and the class is currently building balsa wood model houses.

“We went over how to read blueprints for homes and stuff, and all the individual parts. Walls, rafters, all that,” Cortes said. “And then we got some scale tools, a little saw, a little nail gun and a bunch of balsa wood, and we’re building little scale model houses, like a foot and a half across maybe.”

According to Posey, the model houses demand similar technique and academic skill to the garden sheds and other projects Construction 2 has worked on in past years, despite being much smaller. Posey uses his own background as a custom home builder to teach his students the theory of building a house from the bottom up. The layout processes of a balsa wood model house parallels full size houses, as students learn the same markings and measurements, albeit to scale.

“The intellectual part is identical,” Posey said. “But they’re just not using the real tools to do it, which is the easy part to learn. You know, learning how to use a skill saw, learning how to drive a nail or use a pneumatic nail gun, those are easier than learning the academics of how to (build a house).”

Construction 2 student senior Tessa Perez enjoys being able to build while in distance learning but prefers the access to machines and a designated workspace afforded in-person. Despite the hindrances associated with constructing at home and receiving instructions via Google Meet, Perez feels that using simple handheld tools and the materials provided work well.

“Usually in class, we’ll get at least one wall done with the teacher giving the measurements needed to frame it while showing the class,” Perez said.

“The first thing is to measure and cut the wood into the right dimensions. Then I make sure all the pieces fit together without glue or anything, and then I can start to glue and then nail the project together,” Deboe said. “It will look pretty messy, so it’s important to wipe up the excess glue and sand it down.”

Deboe chose to take construction because she knew it was unlike any class she had taken before.

“I get to learn about something I knew almost nothing about,” Deboe said. “I had no idea there were so many different kinds of saws, and now I know how to use all of them without losing any fingers.”

According to Posey, many of his students use the skills they learn in the class to build on their own, like Cortes.

“I have also had several students of mine accepted into apprenticeship programs here in the valley,” Posey said. “Approximately a year later, they are placed in jobs that generally exceed $100,000 salary the first year.”

While COVID-19 has put some projects on hold, Posey has hope for next year.

“Next year, we intend to get involved with Habitat for Humanity for experience and volunteer work with homeless structures and starter homes,” Posey said.

Despite the pandemic, many construction students have enjoyed their experience.

“(I) just like the vibe that you get there because everyone’s kind of chilling, doing whatever they need to be doing,” Cortes said. “It’s really casual, really laid back… best class I ever had.”