OPINION: Organizations like NEXT for AUTISM harm autistic people 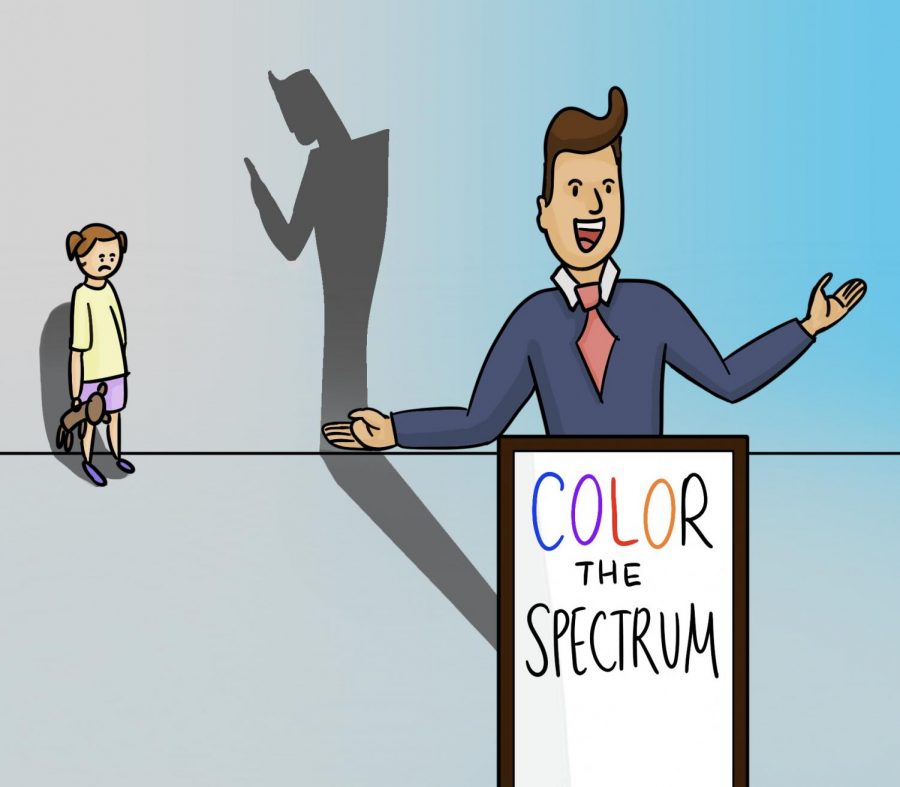 Instead of uplifting autistic voices, these organizations create misconceptions about autism.

On April 30, celebrity’s Jimmy Kimmel and Mark Rober hosted a fundraiser called “Color the Spectrum” for the non-profit organization NEXT for AUTISM. Nonprofit does not mean altruistic, and NEXT for AUTISM is one in a long line of charities claiming to be for the benefit of autistic people, yet they actually cause incomprehensible damage to them.

Similar organizations include Autism Speaks, Autism Society and Generation Rescue. These groups often focus on curing autism, something not only impossible but also representative of the harmful rhetoric that autism is a disease. The organizations are not led by Autistics and instead put the spotlight on the experiences of parents and families with autistic loved ones.

Celebrities play a large role in the popularization of pseudo-supportive charities, and a disturbing number of them promote or donate to the most infamous: Autism Speaks. According to Look to the Stars, a website that details celebrity charity activity, Jack Black, Lady Gaga, Tina Fey and many more have given their support.

Color the Spectrum is not unique in any aspect other than its silver tongue. The organization wrote in its Statement of Purpose that “[it] was founded specifically to address the extreme lack of schools and services desperately needed to help people living with autism right now,” which on its face seems supportive enough. However, the actual words of two founders, Laura and Harry Slatkin, paint a different picture.

In a now-removed internet documentary,  “Autism: True Lives,” the founders stated, “We put locks on all the doors leading outside because we didn’t want [our son] possibly going into the pond. But there were times when you hoped he did, because you wouldn’t want him to suffer like this all his life.”

This is a horrifying and ignorant statement, indicative of a deep-seated misunderstanding that autism is suffering. For most Autistics, autism is an immutable part of being human, like sexuality or skin color. Similarly, the condition itself does not cause distress; their environment and the actions of people around them does. Such a misconception infects the minds of autistic children whose parents are part of cure-oriented or affiliated organizations.

In addition, NEXT for AUTISM claims in their Statement of Purpose that they are partnered with Autism Speaks on strictly access related business, not to help cure autism. This is suspicious on a couple of levels.

Firstly, if they really did not want autism cured, they would denounce Autism Speaks not partner with them for any reason. Secondly, they expressed in a Town and Country article that they wanted more money to go to autism research, presumably with a cure as the end goal.

It is unknown what the proceeds from Color the Spectrum will fund, but it is unlikely to uplift autistic people and their voices. Alternatives that will, however, are Autistic Women and Nonbinary Network, and Autistics for Autistics, both of which are Autistic lead and verifiably are not tied to eugenics efforts against people on the autism spectrum.

Boycotting efforts were launched to combat the fundraiser; Autistics and allies hijacked the tag #colorthespectrum on social media with pro-autism fundraisers and personal crowdfunding pages for individuals in need. Hopefully, #financethespectrum will gain enough traction to reverse some of the damages done by uninformed celebrities, but as always, it is an uphill battle and will likely be a net loss for autistic rights and self-advocacy.