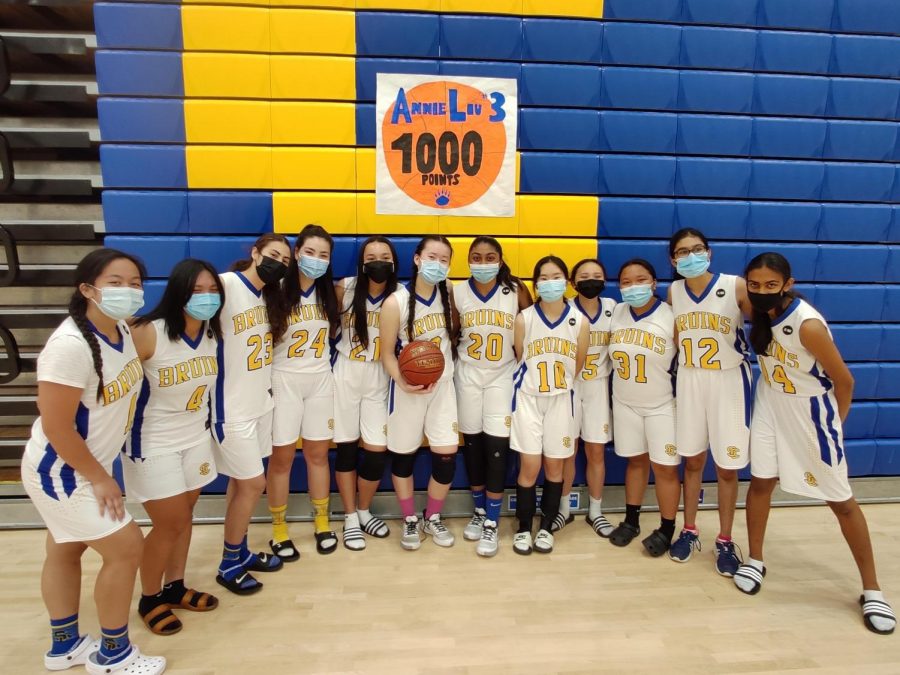 On May 11, 2021, senior Annie Liu scored the 1,000th point of her high school basketball career with only four minutes left in a home game against Saratoga High School. At the next deadball opportunity, her coaches called a timeout and the projector on the gym wall rolled up to reveal a poster that read “Annie Liu, #3, 1,000 points.”

For Liu, the long-awaited moment took several minutes to sink in.

“Coming in as a freshman on varsity, I never would have imagined reaching 1,000 points because it seems like someone who’s like an all-around amazing player, who can score 20 points per game consistently for four years,” Liu said. “But, I feel like 1,000 points really is a culmination of all my hard work, even starting as young as fourth grade.”

Starting on the SCHS varsity girls basketball team as a freshman, Liu became team captain junior and senior year. For her, achieving her 1,000-point milestone came during some of the toughest moments the team faced. The season was postponed due to the pandemic, and players who joined the team once basketball was allowed wore masks and were tested for COVID-19 regularly.

“We only have 14 games this season,” Liu said. “COVID really pushed back everything, and there was a time where I didn’t even think we would have a season, but I’m so glad we did and I’m so glad that I decided to play despite all of the safety and health concerns.”

Liu’s coaches and teammates were excited to celebrate her achievement. According to head girls basketball coach, Melodee Kiyota, scoring 1,000 points is a rare achievement in high school basketball.

“When she hit the 1,000th (point)… at the next deadball opportunity we called the timeout,” Kiyota said. “We all cheered for her and the few fans that we had in the stands, they kind of acknowledged it as well. And then, we did a little bit of a pause during the game… but it was pretty special to be able to witness that because again, it doesn’t happen all the time.”

“Annie’s work ethic… it’s something that you don’t see every day and in many people, but she is dedicated. She’s working on her craft,” Kiyota said. “That’s why she’s good at what she does. And she’s a great captain, so all of the girls that are playing with her, we want them to use her as a resource.”

“She’s one of the only players that has received this achievement at Santa Clara,” Dangeti said. “It’s been so amazing to learn and play with her for the past three years. She’s a great role model on and off the court, and she’s a great leader for the rest of the team.”

For Liu, who has found a home in basketball, scoring 1,000 points would not have been possible without the support of others. She is grateful for her family and coaches’ unrelenting confidence in her, and she reminisced about practicing with her seven-foot tall basketball hoop as a child.

“Now it’s like everything is kind of a reality… I am playing basketball,” Liu said. “I am leading the team during the toughest moments, and I’m that player that I kind of imagined myself to be when I was in fourth grade.”