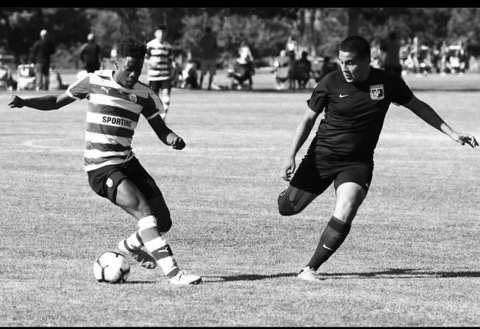 After winning a regional soccer championship and coaching a soccer team of his own, senior Tamba Di Mattia has received a scholarship to the University of San Francisco for his adroitness and success in soccer. Mattia is set to attend USF in fall 2021.

Born in Sierra Leone, located in West Africa, Mattia emigrated to the U.S. at a young age, where he started playing soccer. He has been playing soccer and American football since moving to the U.S.

Before starting to play organized soccer in seventh grade, Mattia traveled around the world, playing in a multitude of different countries, including some in Central America.

“I was kind of learning soccer and figuring it out, and it was really nice to have the experience of seeing the grit from other players which gave me the grit,” Mattia said. “I won’t stop fighting for a ball until I get the ball.”

Mattia started playing organized soccer for local club Santa Clara Sporting. Sporting recognized his talent and provided him with additional experience and opportunities pertaining to advancing his soccer career, which Mattia is beyond grateful for.

“Santa Clara Sporting recognized mine (talent). It’s unbelievable. I’m so blessed to be in this great country and to have this great opportunity,” Mattia said.

Mattia views his soccer career as an avenue to achieve his other life goals.

“Coming from a war-torn country, you come here, you don’t have a lot of money, and all you know how to do is to play a ball, by sacrificing and generally realizing that playing a ball is what’s going to help me in my future,” Mattia said. “Then you get good. Others (recognize) your hard work.”

Mattia plays in a forward position for Sporting, scoring goals for his team.

“I love scoring. I like getting as many goals as I can, but I half come away with all the assists in the game because that means that I shared the ball, and everyone was happy,” Mattia said. “It’s a team sport, so I like keeping that much.”

“I think one that I will always remember is in the regional final, when I think I scored two goals and then assisted and that was what helped us win, and that was massive, to be the driving force for your team to succeed. That was just so amazing,” Mattia said.

The success was not long-lived, however, as Mattia ended up losing in the semi-finals, which was one of the largest upsets throughout his soccer career.

“Losing in the semi-finals is probably the hardest loss that I’ve ever had in terms of it (the national championship) slipping through your fingers,” Mattia said.

Receiving his scholarship to the University of San Francisco has given Mattia an exciting glimpse of his future and reminded him that hard work pays off.

“I want to play at the highest professional level I can,” Mattia said. “I just want to be a happy guy doing what I love.”