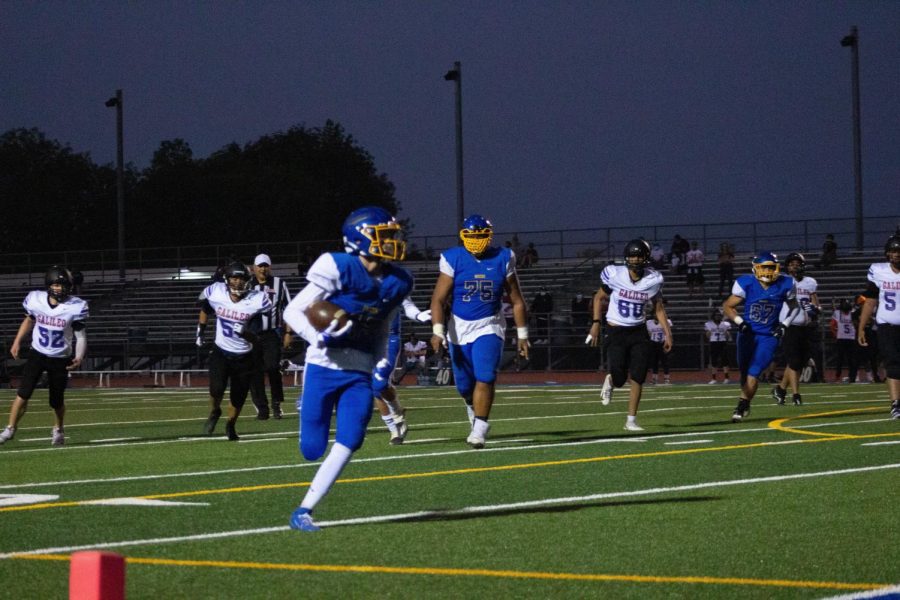 The Bruin spirit was strong in the first game of the season.

With a crowd full of parents, friends and family, the SCHS varsity football team dominated the Galileo Lions 66-0 in the 2021 season opener.

As soon as Galileo kicked off, the scoring started. After getting the ball to their 45-yard line, the Bruins scored a 55-yard run for a touchdown that was later revoked due to holding.

The crowd was quickly pleased when senior Michael Rios earned a 25-yard touchdown. Soon after, the Bruins earned three more touchdowns and three extra points, ending the quarter off strong with a 28-0 lead over Galileo.

The Bruins started the second quarter strong when senior Carson Muench gained a touchdown which was followed by another extra point, bringing the score to 35-0 Santa Clara. The Bruins tally kept rising when sophomore Matthew Nguyen scored his first varsity touchdown, which he claims was an exciting start to his varsity career.

“It felt amazing. I never expected to be able to play at such a high level at the tenth grade,” Nguyen said.

The half ended after junior Andrew Euley Jr. scored for the Bruins with an extra point. Soon, senior Kameron Brown recovered a Galileo fumble into the endzone and was followed with a 2-point conversion, ending the half with a crushing score of 57-0 Bruins.

After a hard-fought start to the third quarter, senior Aiden Rangel ran 25 yards for the Bruins’ ninth touchdown of the night. Like before, the Bruins gained an extra point and ended the quarter with a 64-0 lead over Galileo.

The last quarter progressed slowly with both teams trading possessions and the Bruins’ field goal attempt getting blocked. As the quarter was about to end, the Bruins fought hard and earned a safety. The game ended with a whopping score of Santa Clara 66 and Galileo 0 as the crowd of Bruins cheered for their beloved team.

Nguyen believes the team will be motivated to continue this trend throughout the year.

“Every day we train harder and get better. Expect the score to be higher next game,” Nguyen said. “This is our house. This is what we’re going to do and we’re going to keep it that way.”