FOCUS: Soaring paper wastage: one of the many consequences of the pandemic 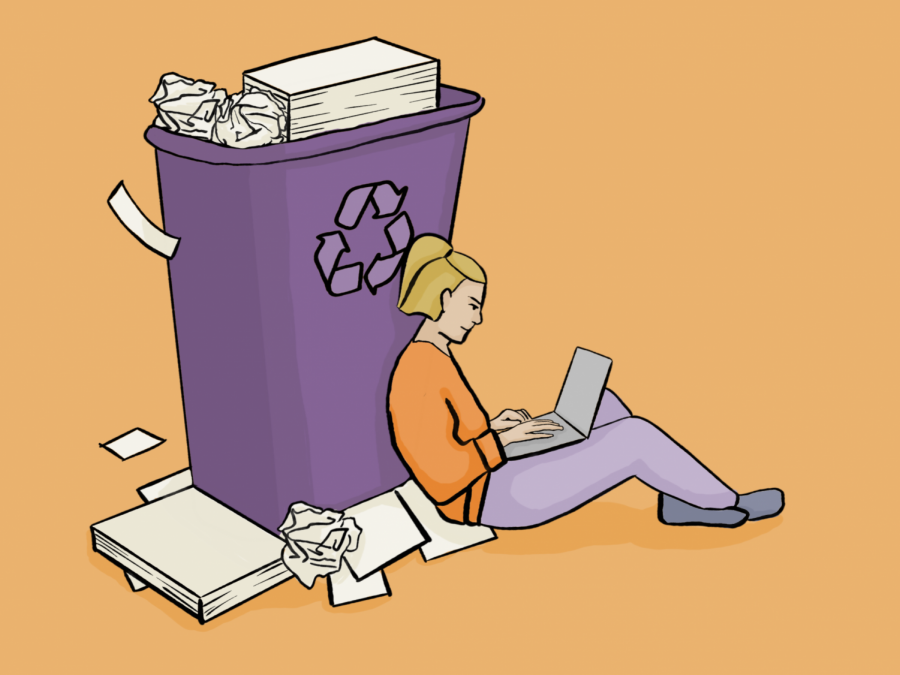 The SCHS community recognizes the impact of paper waste on their community and appreciates digital work for its efficiency.

The COVID-19 pandemic has highlighted numerous economic, environmental and educational injustices. Although these issues existed prior to the pandemic, members of the SCHS community aspire to combat such issues as they return to in-person learning.

During distance learning, teachers made numerous changes to the way they executed their curriculums, one being going paperless. As SCHS returns to the classroom, some teachers continue to keep their assignments digital, such as English teacher Maichen Liu-Grossman.

“I basically tried to keep everything all digital,” Liu-Grossman said. “In my collaboration teams, we all agreed that it is much easier because you never know what will happen, for example, going back to distance or online learning.”

Junior Ein Hong observed a reduction in paper assignments and appreciates the convenience of digital ones.

“Some teachers give the option of either digital or physical copies of assignments, lessening the amount of paper needed, and most teachers have cut back a lot with the number of paper assignments,” Hong said. “It is definitely easier to manage my stuff because if I needed anything, I could just get my computer versus having to go through my folders and find certain papers.”

Science teacher Saheed Mohamed, however, chooses to assign his work both digitally and on paper. He noted sometimes it can be more efficient to learn science through paper.

“I get that in English class when you are reading or typing an essay, it makes a lot more sense to keep that digital,” Mohamed said. “But in math and science sometimes, when you have application problems where you have to write things out, it is just easier to do it on paper than to have students type it out.”

Increased paper usage can be troubling for the environment. According to the American Federation of Teachers, 40 percent of waste from schools derives from paper.

“A lot of high schools in the U.S. do not have enforcement regarding wastefulness, which makes students think they can do whatever they want with the materials they are given, such as food or paper,” Rivera said.

While it is vital to reduce one’s carbon footprint through reducing waste, it is equally as important to hold corporations and government institutions accountable for their contributions to climate change, reported Harvard Political Review.

Rivera believes that in order for individuals to make a difference in regards to the environment, they must advocate for government policies that institute changes.

Although paper waste was hardly present in distance learning due to digital work, other educational flaws were exacerbated online. According to the Atlantic, 20 percent of students lacked proper access to technology, hindering their educational performance.

Mohamed, too, noticed how online learning intensified the divide between affluent students and those from a lower socio-economic status who did not have proper access to educational resources.

“You could clearly see certain disparities in distance learning,” Mohamed said. “I had students who have their own bedrooms with quiet environments, computers and a nice desk to do their work in, whereas there were students in the same class (who) as soon as they unmute themselves, you can hear multiple kids yelling in the background.”

As the SCHS community adjusts back to normalcy, Liu-Grossman hopes that other teachers used their experiences in distance learning to create better classroom environments.