SPORTS: No Drum Major? No problem. 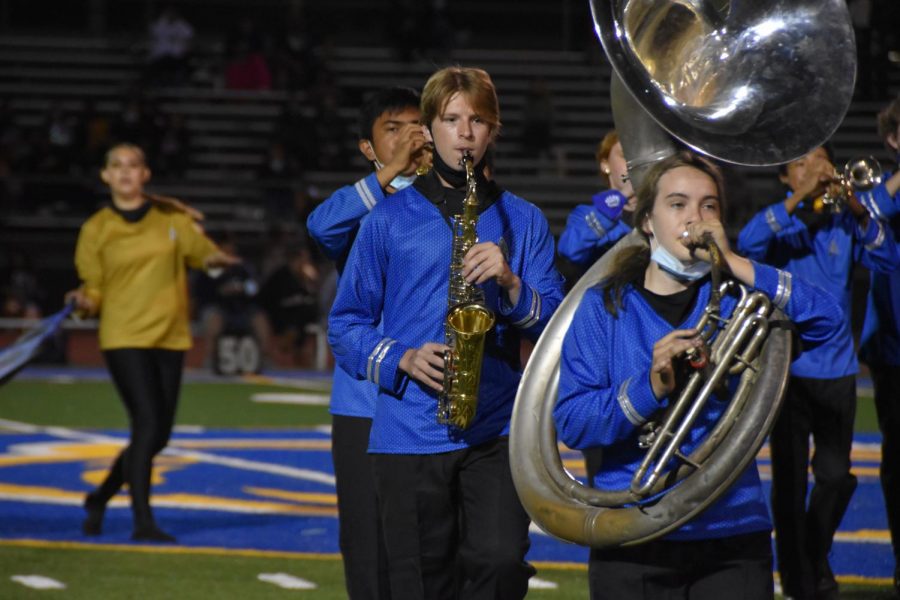 Marching band played on Oct. 15 at the homecoming game.

During the homecoming game halftime show on October 15, 2021, SCHS Marching Band took the field for the first time since their 2019 season two years ago. Along with a set of shiny new Star Trek themed uniforms, the marching band had undergone a few changes since their last performance.

Junior Jasmine Kelly-Tanti began the show with her clarinet solo. She counted herself in and kept her own time instead of being counted in since the marching band does not have a drum major to conduct the band this season, unlike in past years.

A drum major is a leadership position in the marching band that is usually occupied by one or two upperclassmen. Their natural habitat is the podium in front of the band, from which they keep time. The drum major is also responsible for leading the band in the director’s stead.

Senior Chloe Schneider, who is participating in her third year of colorguard, said she does not believe the absence of a drum major affects the band too greatly.

“Honestly, I don’t think there’s too much of a difference leadership-wise. A lot of the captains of each of their sections have just taken up leadership responsibility equally, and it’s working pretty well so far,” Schneider said.

In place of a drum major’s conducting, the band has adapted to listen for timing cues from each other.

“For different movements, we’re having drum tap-offs, so really it’s just a lot of listening to Percussion,” Kelly-Tanti said.

Some marching band members believe that a lack of lowerclassmen could contribute to the smaller numbers.

“I feel like the majority of our band is upperclassmen right now. At least colorguard is,” Schneider said. “I think a lot of times, the freshmen just don’t know about marching band, especially colorguard, going into high school, and you kinda see us at football games and then we have a lot of people see us perform their freshman year and then decide to join in the later years after they see us.”

“My mom did marching band when she was little, and it was always just something I wanted to try,” Webb said.

This year, it is not just the lowerclassmen lacking experience. Due to the absent season last year, returning seniors have at most two years of experience in SCHS’s marching band.

“The people you can look up to as examples also don’t have as much experience, so we’re all kind of learning together,” Kelly-Tanti said.

Despite the changes and challenges the marching band has faced both this season and last, many members continue to have a positive outlook.

“I’d tell them it’s a great experience, great community,” Webb said. “There’s no requirement for how good you have to be.”