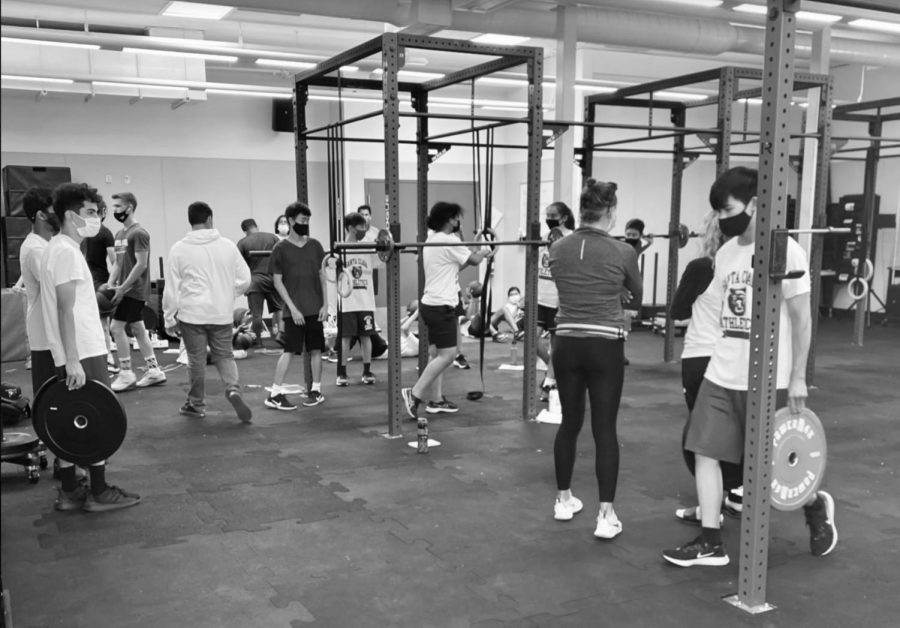 Athletic P.E. takes place during 7th period and is open to all athletes on campus, unlike in past years where it was ex- clusive to football and basketball players only. The class strives to help students train and stay in shape for their sport.

The squeak of basketball shoes and the play-calling of football can be heard, but also the thwack of track shoes, the ping of baseball bats, and the splash of water polo players. SCHS has widened the limits of seventh period Athletic Physical Education, allowing all athletes to enroll, not just basketball and football players.

P.E. teacher Brett Hall is one of the teachers who leads an Athletic P.E. class and explained the reason for the inclusivity.

“What we’re trying to do now is get everybody that we can that wants to physically train, get stronger, faster, better, physically for their sport,” Hall said. “That has opened it up to the umbrella of all sports, and any student can join us.”

Most of the workouts are comprised of tabata style exercises, weightlifting and sprinting drills. Junior Noel Cevallos is taking Athletic P.E. in hopes that the exercises will be a greater challenge for him and further develop his athletic ability.

“It’s focused a lot more on cardio and conditioning, like getting stronger instead of just playing a sport,” Cevallos said.

Sophomore Kyle Ogino said that there are three classes within Athletic P.E., each containing 20 students. On a typical day, those three classes split off into two groups of 30. One half does weightlifting while the other half does speed workouts. Halfway through the period, they switch.

There are three P.E. teachers who teach Athletic P.E., but any on-campus teacher can volunteer to pull athletes to train for specific sports.

“If there’s on-campus coaches that want to work with that athlete, they can pull them from our class to do skill-based work because we’re doing all of the training-based work,” Hall said.

According to Hall, the aim of Athletic P.E. is to help fuel students’ motivation to continue achieving within their sport.

Because Athletic P.E. is offered during seventh period, Hall reported, students do not have to miss an academic class when departing early for games. There are also more coaches available to work with athletes on specialized skills. Athletes, however, may not be able to get the proper rest needed after workouts in order to perform at a high level during their games.

“In the future, if we are able to switch it to a first period P.E. and have sports first thing in the morning, they could get a hardcore workout in and then they’ve got five, six hours to rest until their game,” Hall said. “Then that would be really beneficial because then they get the rest needed and they can go into their game and they’re not going to be super tired. Their performance is not going to be lacking, and they’ll be able to do both.”

Hall said that any potential adaptation made to seventh period Athletic P.E. would be influenced by the preferences of the students to ensure that they are content with the changes.

Ogino said that he is content with Athletic P.E. as it is and is happy with the experience the Athletic P.E. has provided him so far.

“It’s a pretty relaxing and calming period,” Ogino said. “I get to spend time with people who are interested in the same stuff as I am willing to get stronger as a whole.It’s a really good environment for athletes, and it does help relieve stress. The workload is not that hard. It’s all based on yourself, you don’t have to push yourself past any limits, you just want to do what you can and just slowly progress.”