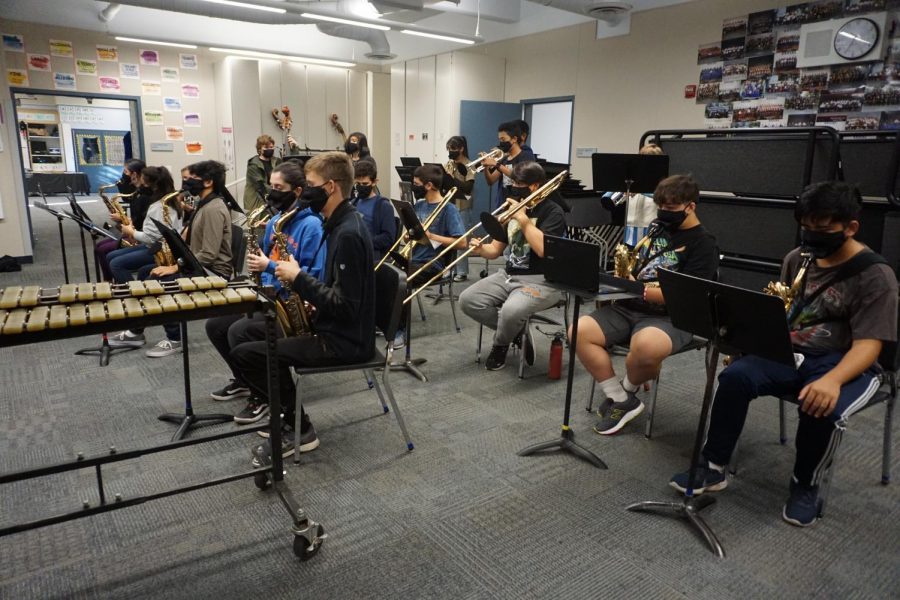 As things become more certain, the band plans on performing in the second semester.

With the return to semi-normalcy after a year of confinement, many things have changed. For the musical side of SCHS, this means the loss of Jazz Band, instead replaced by another Symphonic Band so students could find their fit based on their level of experience.

“Symphonic band had so many people across different levels of playing and same with the jazz band, so Johnny (Erdman) felt it would be best if we split into two symphonic bands,” junior and unofficial jazz band co-founder Arwen Hirsch said.

The new jazz band, however, is not within the educational curriculum. Instead, it is being student-led by Hirsch and senior Carlin Bustos and is open to anyone interested. Jazz band, however, is more oriented toward those who have ties to music, such as being in the marching or symphonic bands.

“I would suggest, if you want to join, to have some experience. If you can read music, if you got a few years of playing an instrument under your belt, then you’re probably going to be okay,” music teacher Johnny Erdman said.

Currently, band members meet on Wednesdays after school in the band room for around an hour. They practice short pieces from existing books the previous Jazz Band class had. Due to COVID-19 restrictions, members initially met outside, though that changed.

“Now, we meet inside because we have masks and bell covers, and we meet at consistent times on Wednesdays for about fifty minutes or an hour,” Bustos said.

The unofficial band plans to perform at least once or twice this year, most likely next semester once plans are more situated.

“We haven’t really considered performing much yet just because it’s still a really new thing, but hopefully later, as the time goes on, we can do more things,” Bustos said.

The group currently consists of around 20 students, but many members feel this is most likely going to increase. The band plans to branch out and expand so that more students can enjoy jazz.

”Our first step would be getting more kids in band in general, and then into jazz,” Hirsch said. “First, they join the big Symphonic Band, and then if they’re interested in jazz, they can do jazz.”