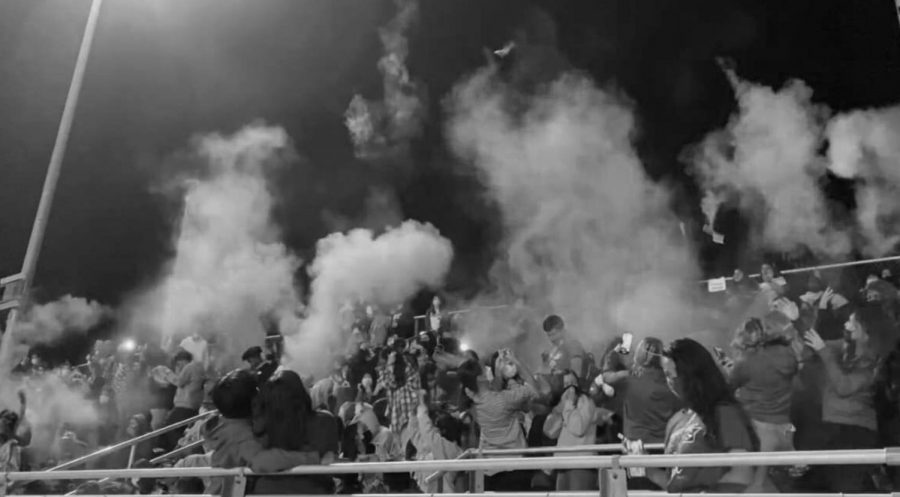 Colorful party powder was thrown in the student section at the 2021 Homecoming to enhance student energy and hype during the Varsity football game, just one of the activities they plan on doing to bring spirit to SCHS sports.

After being on a hiatus for the 2020-2021 school year, Blue Hole, a club originally created to increase Bruin spirit at football games, is hoping to expand their initiatives and presence to more sports.

“Compared to previous years, I felt like there wasn’t as much participation,” Visitacion said. “Sometimes it got made fun of, and then sophomore and junior year, Blue Hole didn’t really exist, part of that was COVID though.”

For his senior year, Visitacion wanted to bring the club back and revamp it. Their first goal was to get more students involved and hyped at football games.

In order to promote sports games, members of Blue Hole took to social media, especially Instagram. Flyers were made to hype up events, such as football and volleyball games, which many believed helped to spread awareness of and increase engagement for games and senior nights.

As they began to increase their use of social media, Visitacion started posting sports edits of football players prior to their senior night.

“I make edits. It started out for fun and something I do in my free time. I made edits initially for my friends who were on the football team,” Visitacion said. “They had sent me action shots and photos. I have Pinterest, and I saw some sports edits. I thought they were so cool and I wanted to try it out, so I took their football action photos, added some stuff here and there. They turned out pretty cool.”

Alongside creating sports edits for athletes, senior Adam Perez made efforts to bring energy to the student section at home football games. According to Perez, he feels his job is to prove to students that school spirit is fun.

“With the help from JJ posting it all over social media so the word can get out about events, themes and games, it allows students to participate and come out to support the athletes of SCHS,” Perez said. “Me on the other hand, I’m the hype man. I try to get more and more students hyped about the games and get them more involved so they come back to the next game and so on.”

Perez also arranged for the student section to throw party powder in the bleachers for the Homecoming football game.

“We saw all the private schools do it, and we also wanted to give the kids something to remember since it was the seniors’ last football games and the sophomore’s and freshman’s first Homecoming football game due to COVID,” Perez said.

Although satisfied with what they have accomplished so far for the fall sports season, Blue Hole members are eager to bring Bruin spirit to other SCHS sports teams.

“We obviously support football, which is how it has always been. We also hyped up girl’s volleyball for their senior night,” Visitacion said. “We are planning on doing stuff for boy’s basketball, girl’s basketball, and hopefully soccer and baseball.”

Despite using social media as their main method of publicizing information, Blue Hole wants to encourage students to support athletes through using other platforms.

“We want to advertise for the different games, so that is our next goal. We make social media our biggest way to promote since that is where a lot of the community gets their information,” Visitacion said. “I think our next step is to do flyers and even announcements so we can get the word out about upcoming games.

Visitacion hopes expanding Blue Hole’s advertisements across more platforms and in innovative ways will help to increase student engagement at other sporting events.

“For the past many years, there are sports that people don’t support the same as football, and we really want to change that,” Visitacion said. “We want to make as many athletes at our school feel appreciated and supported, especially for seniors this year.”