SPOTLIGHT: Growing with your grade 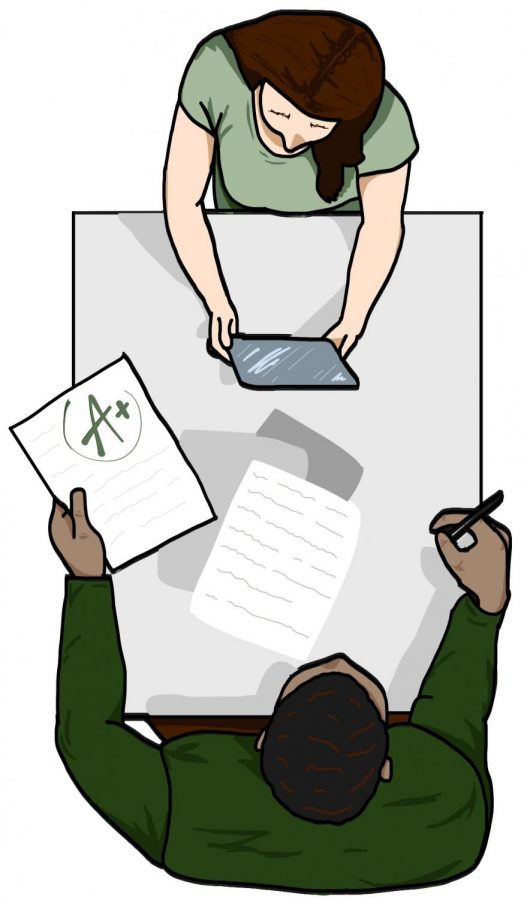 The new grading system involves grade negotiations where students discuss their growth in the class to determine their grade.

A new grading system has been implemented for several of the SCHS English courses, including Multicultural Literature, AP Language and Composition, English 11 and some English 10.

The main concept of the new system is for students to acquire evidence to demonstrate their progress throughout the semester rather than accumulating points through assignments toward a final grade. At the beginning of the school year, students identify the most significant standards and set personalized goals, repurposing the objectives to be their guidelines for tracking their progress.

English teacher Daniel Eaton explained what sets apart this system from the traditional grading is its emphasis on student independence rather than teacher deduction.

“This practice involves the students in an element that isn’t done with the traditional grading system,” Eaton said. “One of the key things of the system is that there’s always the possibility of revision and redoing things to encourage learning and growth.”

Although the purpose of the system is to highlight the growth of the students, there have been some misconceptions about progress in relation to class grades. Eaton described an instance where one of his students felt they had to continually perform better in order to ace the class, but this was a misunderstanding.

“It’s more about making progress on your goals. It doesn’t have to always be getting better. You just have to demonstrate that you have evidence that you are maintaining yourself well,” Eaton said. “If you’ve already mastered a certain skill, we are not expecting you to continue. It all depends on where you start.”

Eaton encourages other schools to implement this grading system because students are given more responsibility and a chance to assess their work ethic.

“I feel like it really empowers students to take charge of the journey rather than just a teacher having power over what their final is,” Eaton said.

To succeed, Eaton advises present and future students to be specific and reasonable about the goals they set at the start of the semester.

“Setting clear goals in the beginning and then focusing on the feedback that you get from the assignments from the teacher to improve their scores, that’s the key to doing well,” Eaton said.

English teacher Paige Cruz agrees that the new grading system allows students to have more agency and responsibilities because their grades are heavily dependent on their progress as tracked by their personal goals.

“As the expectations are set ahead of time, students know right off the gate what they need to do to get an A,” Cruz said. “They use that as their guide, so they can set their goal as far as what they would like to grade-wise.”

Although students may feel stressed with such independence, according to Cruz, it is important to remember that improvement by autonomy is the main concept of the system.

“The idea is to encourage students to take ownership of their learning through assessing and tracking their own growth,” Cruz said.

The new grading practice seems to call for more student and teacher management individually, but mutual cooperation is also important.

“Obviously, the students are still responsible for the work and the teachers are responsible for submitting and assigning. I just feel that it’s learning that is the community effort,” Cruz said.

Some students have grown to appreciate the new grading system. This is the case for senior Emily Le, who enjoys how it promotes the idea of growing, allowing her to seek improvement in different aspects of English.

“Since classes are really meant to encourage growth, I think that you’re really able to feel more comfortable in trying out new styles of writing, or really just improving where you feel like you need to improve.” Le said.

“I think it is great since students don’t have to worry so much about the grade they’ll get. It also teaches us to be responsible for our growth,” Andales said.

Similarly, senior Derren Driz has grown fond of the new system after not having to worry about the impact a final assessment would have on his grade.

“At first, I was kind of iffy about the grading system because I was just so used to the traditional grading system,” Driz said. “But as the semester went on, I started to enjoy not having the pressure of a test or quiz bringing down my grade.”

With softer deadlines and often writing revisions, junior Prateek Kundu finds this system more ideal as it gives him time to focus on other classes while still learning and gaining new habits in English.

“I would say having the system there allows me to not only keep my grades good for English, but with the laid back style of the system, I can focus on other classes too,” Kundu said. “Students can take their time, especially with other classes to handle, and still get a good score.”

Along with the benefits, hardships are paved along the way as well.

“Right now, I would say because of other classes and finals coming up and having to start studying, I would say that I am slacking off mostly because in my class you’re allowed to turn in late work any time, and you won’t have prejudice against you.” Kundu said.

In some classes, the grading system has licensed students to take advantage of the flexible deadlines, and Kundu believes that slacking off too much can cause more stress when negotiations finally come around.

“I would say it’s harder because of those privileges. More people are turning in things unreasonably late. I know someone who turned in all of his work the day before negotiations,” Kundu said.

For Andales, however, softer deadlines encourage him to complete his work for the class in a more timely manner rather than put it off until the last minute.

“Although due dates are pretty lenient, I started doing my WoW (writing of the week) essay earlier just to take off the stress of having to do it right before it’s due,” Andales said.

In attempts to show growth, English classes also allow students to revise certain pieces of writing. In past years, work was mainly graded off specific criteria and principles according to the assignment. Now, upperclassmen can indulge in writing with different styles and improve as they can go back and reform their writing.

“I feel like I have more time to improve my writing instead of trying to finish assignments, which in the end, led me to earn a better grade,” Driz said.

Le appreciates how she is allowed the opportunity to go back and rework her writing.

“Your grade is not final after your first turnin. You’re able to revise, and that definitely helps with more for learning and understanding how you can grow,” Le said.

Many feel rubrics tend to limit imagination if students feel compelled to complete the assignment strictly as outlined. The new grading system, some say, brings out a writer’s creativity since they are not constricted by a rubric.

“You kind of had to do your best in each assignment in hopes that it did well based off of the rubric with the letter grading system,” Le said. “But I feel like with the new grading system, I’ve been pushing myself to write more creatively, more descriptively and more vividly.”

The new grading system, theoretically, is tailored for student empowerment, allowing them to seek interest in their assignments and creating a positive, stress-free learning experience. Some, like Le, agree with the practice.

“With this grading system, you have more leeway because I think that growth is really important,” Le said. “I think that’s what classes should be about, how much you’ve grown.”