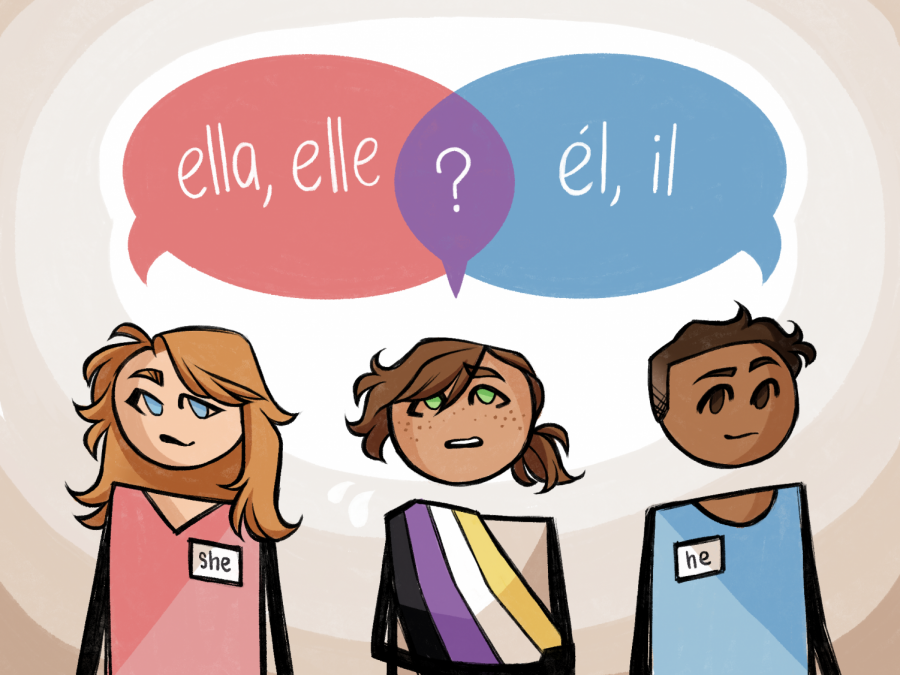 In languages such as Spanish or French, most words are gendered.

While they may have existed for a long time, the acceptance of they/them pronouns is fairly recent in the U.S. As the use of these pronouns becomes more common across the globe, strongly gendered languages struggle to find a solution for gender nonconforming individuals.

Language teachers and students at SCHS are challenged with this problem as well. French teacher Grace Garvin explained why it is difficult to speak French in a way that remains gender neutral.

“The language itself is more gendered,” Garvin said. “The way they say ‘they’ already has you picking an ‘il’(he) or an ‘elle’(she), which already goes back to he and she forms.”

French is not the only language that encounters this problem. Freshman Madeleine Schmitt believes that gender neutral pronouns should be taught in her Spanish class. She pointed out that efforts toward gender inclusivity have already been made in other languages and cultures.

“I really like how some clubs are changing names to be more inclusive,” Schmitt said. “Like Latino/as to Latinx or Filipino/as to Filipinx.”

French and Spanish teacher Justin WIlliams explained that the French language has made efforts to create a “they” pronoun.

“The dictionary of France actually included this year in its online edition a new pronoun called ‘iel,’ which is a combination of both iI(he) and elle(she),” Williams said. “That has sparked controversy all over the place in France.”

“It’s not much harder to learn, and it’s efficient to use to respect non-binary people and not misgendering people when first meeting,” Schmitt said.

According to Williams, it can be hard to find the right balance between respecting linguistic traditions and people’s pronouns.

“France has a very interesting relationship with its language. It’s very, very personal. It’s almost emblematic of their entire nation. Yet they do have a history of supporting human rights, so you are really looking at a nation that’s at conflict within itself,” Williams said. “If you don’t have a pronoun that represents you in the highest level of government, you’re invisible, essentially.”

“It makes me feel a little out of place, not knowing exactly what to say when you don’t feel like you have a place,” Abad said. “I feel like it’s like, ‘Oh, girls now, boys now…’ but where do I fit in?”

Abad wants to see the subject addressed in their class and believes that the SCHS community can make progress to greater inclusivity.

“I feel like we can make more progress if we have the teachers on board, and I know they are capable of it,” Abad said. “Even if they don’t personally believe in it, they can just accommodate at least for the students in their classes who are in the LGBTQIA community.”