While ASL students push for a fourth year of the language, teachers want to join the National ASL Honor Society 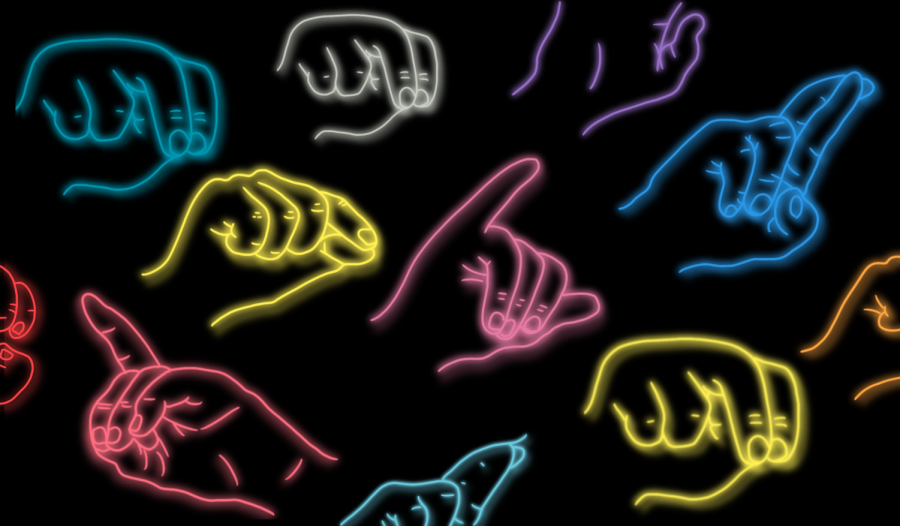 ASL students face difficulties in their efforts to gain the Seal of Biliteracy through the language.

The Seal of Biliteracy is a gold sticker that goes on students’ diplomas and signifies that they attained a high level of proficiency in one or more languages other than English in speaking, reading and writing. Students can demonstrate their ability to communicate in both English and a non-English language by passing the language-specific portion of the CA Assessment of Student Performance and Progress, or CAASPP.

Although other language classes at SCHS, such as Spanish or French, offer their learners the opportunity of attaining a seal, students taking American Sign Language are not given this chance. ASL has no written form, meaning a reading and writing assessment cannot be assigned to ASL learners.

Due to ASL not being eligible for the Seal, sophomore Gabi Carmen took the initiative of addressing this situation by starting their own student petition for an ASL 4 class. If another ASL course was offered, students taking four years of ASL would be able to stand alongside their fellow gold-stickered peers.

“I really wish we had an extra class because then those of us who have taken ASL since we were freshmen can say that all four years we took and practiced it,” junior Xavier Cairel said.

Cairel is not the only one excited about an additional class. Junior Jovhany Castaneda Cabrera, who has taken ASL for three years at SCHS, is also on board for a fourth year of ASL.

“I’m not sure if I would take the class as a senior, but ASL 4 should at least be an option for those who want to pursue the language further,” Cabrera said.

Aminah Hedges, another junior in ASL 3, thinks an additional class for the language would be both fun and academically advantageous.

“I’ve always liked the idea of having a fourth year because I enjoy ASL, and I think it’s something worthwhile,” Hedges said. “The other languages also have four years, so this would bring it up to the same level.”

ASL teacher Talia Orsetti-Ng believes this is a positive situation since the students are advocating for more involvement with the Deaf community and its language.

“The fact that students cared so much about ASL that they wanted the opportunity to take another year really speaks to how much of an impact ASL has made on their lives, and that is all any teacher wants to hear,” Orsetti said.

While the determination and enthusiasm of the students are admirable, Orsetti acknowledged that there are other aspects to consider when contemplating another ASL 4 class.

“Obviously, there are big hurdles to jump over to make such a dream a reality,” Orsetti said.

Factors such as budget, availability and quality of teachers, authenticity and implementation of curriculum and course planning are all important to recognize. According to Orsetti, staff on campus as well as the budget set aside for the language department is already strained as it is.

“Even if we did get the budget to hire a new teacher to teach these extra sections, the expectation would be that we would need to hire a Deaf teacher,” Orsetti said.

Unlike the French and Spanish classes, ASL curriculum heavily features Deaf culture and community. The people and the language are both highlighted significantly in ASL and because an advanced ASL 4 class would delve deeper into the speech and community customs, Orsetti believes it would only be right for a Deaf individual to teach it.

“While I am an extremely devoted fan of ASL, I’m not an authentic representation of a Deaf person,” Orsetti said. “Being Deaf at heart doesn’t make me culturally authentic.”

Even though the proposal of ASL 4 brings up various obstacles, if the main objective of the students is to obtain a Seal of Biliteracy because of its attractiveness to universities or employers, Orsetti and fellow ASL teacher Aimee Hurtado offer another academic route.

“[Because of the aforementioned obstacles,] the best thing for us to do is not have a level 4 class, not advocate for a Seal of Biliteracy and, instead, join the National ASL Honor Society,” Hurtado said.

Unlike the Seal of Biliteracy, the National ASL Honor Society is recognized by the Deaf community. The society is inclusive for signers in middle school, high school, and colleges. For high school, students can choose to take two or three years of ASL with the ASL Honor Society and earn an honor cord and one to two medals to wear at graduation, depending on which requirements they met.

“You also have the opportunity to get scholarships,” Hurtado said. “Overall, Mrs. Orsetti-Ng and I feel the ASL Honor Society has a much better value to our ASL students.”

Both Hurtado and Orsetti applaud their students for having such vigor regarding their academics and ASL specifically. Although they advise students to gravitate to the National ASL Honor Society rather than simply another language course, their respectful dismissal of the petition does not mean they are not happy to hear such efforts are being taken.

Orsetti agrees and encourages all students to continue their passion for the language and not let their motivation to learn or be involved be discouraged.

“I hope the enthusiasm only grows and never stops,” Orsetti said. “That persistence is what really accomplishes goals.”