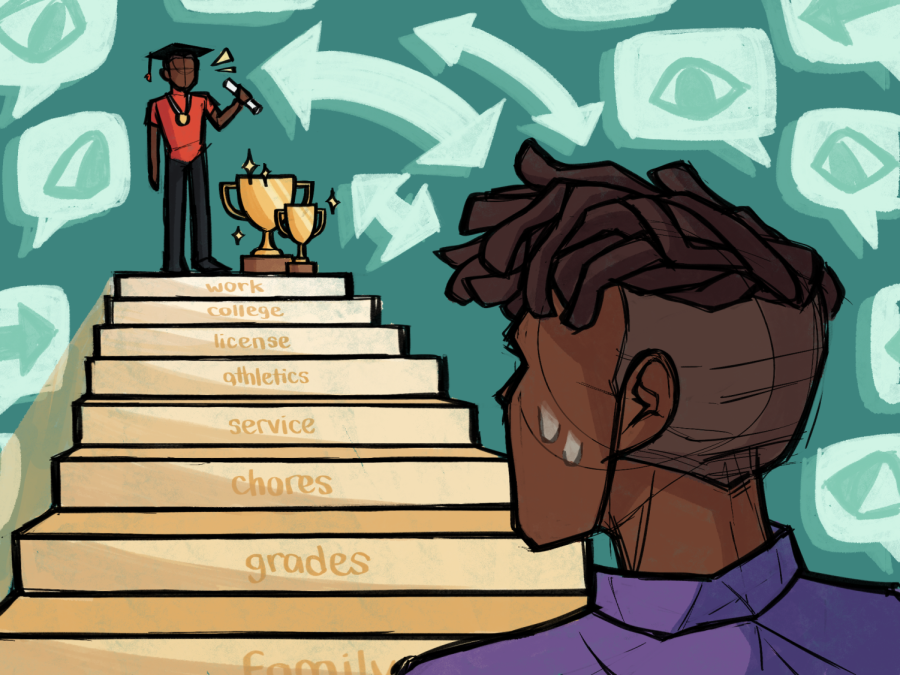 The inner workings of sibling dynamics can be complicated and strenuous, often attributed to academic standards of success. Pressure placed upon the eldest child to achieve educationally can travel to the younger, or be starkly present by comparing the two to each other.

Though it comes naturally to many parents, teachers and acquaintances, this phenomenon is mutually agreed by SCHS students to be harmful to both sibling relationships and to the individuals. Senior Rebecca Doane is frequently greeted by the mentioning of her older brothers and their subsequent lives after school, putting subtle pressure on her to reach their attainments.

“Even grandparents,” Doane said. “They’ll be like, ‘So, your brother did this their first year after they graduated. What are you going to do?’ And I’m like, ‘Uhhh.’”

The brief interactions feel unnecessary and unwelcome to Doane, even when their siblings are contrasted to them.

“I have siblings that are excelling in a lot of things, and when I’m compared to them, it’s very stressful and kind of scary,” Doane said. “Whereas if I have siblings that I am excelling more than them in that topic, it kind of feels good. But also, don’t put down my siblings. I’m protective of them still.”

To help herself when the comparisons occur, Doane reminds herself that no one is perfect, all have their skills and flaws, and herself and siblings should be no exception.

“I would sit there and think, ‘Okay, well, they’re doing a lot better than me in this subject, but in this area, I’m excelling, too.’ So, it’s okay. We all have our different aspects that we do well in,” Doane said.

Comparisons sometimes develop conflicts among junior Serena Ayala and her sisters, grown from unrealistic expectations of quick academic insights, obligations of cooking or earning a driver’s license and bettering the family name.

“It does cause a strain for siblings,” Ayala said. “Sometimes me and my older sister get mad at each other. (…) My older sister expects to be good, and I expect to be good too. It feels like a competition all the time.”

For sophomore Samantha Meali’i Hoffman, the comparisons are internal, manifested from her sibling friendship and subconscious worries.

“My parents don’t put a lot of pressure on me to be just like my brother, but I do personally,” Hoffman said. “We were very close with each other and we don’t really fight. School came naturally for him, but social stuff caused a lot of stress. I have the exact opposite of that, so I think we both internally compare ourselves to each other.”

Though she feels the weight of sibling standards, Hoffman appreciates the positive relationship with her older brother, as well as her role as the second child.

“I think I’m very lucky to be a younger sibling, specifically in the dynamic that I have with my brother,” Hoffman said.

However, senior Mohammed Zaffar, in the role of eldest sibling, feels his position is not obligatory for setting expectations or leading the way.\

“As an older sibling, I don’t really feel pressured into doing better just so I could set a good example for my younger siblings,” Zaffar said. “I mainly try to get good grades and all that for my own gain.”

Though he lacks the experience of it, Zaffar believes that comparing relatives is redundant and degrading for the targeted individual.

“I don’t think anyone should be compared to a sibling or friend,” Zaffar said. “It makes the person who is being compared feel insignificant, like they aren’t good enough. Comparing siblings or anyone can be harmful to one’s mental health, having this constant feeling that they can never be better.”

Ayala, in a similar situation, sympathizes with her older sisters whilst experiencing pressure to improve academically.