REVIEW: ‘When Breath Becomes Air’ explores the meaning of life and death 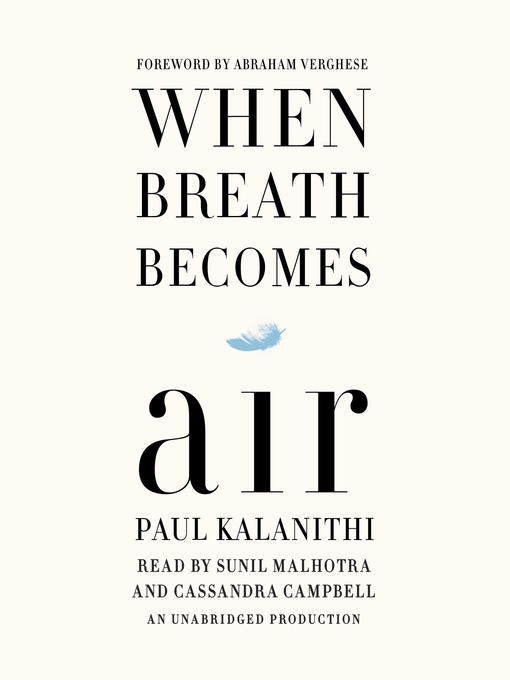 “I flipped through the CT scan images, the diagnosis obvious: the lungs were matted with innumerable tumors, the spine deformed, a full lobe of the liver obliterated. Cancer, widely disseminated. I was a neurosurgical resident entering my final year of training. Over the last six years, I’d examined scores of such scans, on the off chance that some procedure might benefit the patient. But this scan was different: it was my own.”

When life and death exist simultaneously, it establishes a discordant balance for American neurosurgeon Paul Kalanithi battling metastatic lung cancer. Despite his passing at the age of 37, “When Breath Becomes Air” continues to live beyond his death, powerfully influencing readers with compelling details overviewing his experience with family, literature, medicine and mortality.

Published in 2015, the best-selling unforgettable memoir consisting of 256 pages is an amalgamation of beautifully poignant dialogue representing Dr. Kalanithi’s exploration of the answer to the fundamental question regarding life: what makes life worth living in the face of death?

In the two divided parts titled, “In Perfect Health I Begin” and “Cease Not Till Death,” each sentence of the autobiography captures the essence of intimacy and vulnerability. In the first section, Dr. Kalanithi provides a flashback account of his lifetime events prior to his diagnosis. Much of the first half covered his upbringing as a home-schooled son of a strict mother, who exposed Dr. Kalanithi to a variety of literature to pique his interest. Coincidentally, Dr. Kalanithi initially had a poor perception of medicine, associating it with the large absence of his father, a cardiologist, who devoted long hours to the hospital.

Dr. Kalanithi earned a Bachelor of Arts and Master of Arts degree in English Literature from Stanford University. His lively passion toward literature translated to an interest in medicine, where he earned a master’s degree in the History and Philosophy of Science and Medicine at the University of Cambridge and continued on to the Yale School of Medicine. His devotion for neuroscience was motivated by his desire to uncover what nurtured the meaning of life and to witness it firsthand with patients.

In the second section, there is a shift back to the period following his diagnosis. At a rapid pace, Dr. Kalanithi’s health declines and this leads to a newfound vision on his own mortality. A life he once imagined with his wife, Lucy, and his future vanished, and in place was left a void for the unknown to settle. Through a concise, eloquent writing style, and the help of his oncologist and his family, Dr. Kalanithi forged a new life for himself amidst his struggle in redefining his identity, closely tied to the grueling years he spent in medicine. As both doctor and patient, Dr. Kalanithi does not avoid suffering, but rather faces it head on, and at the most pivotal times, found solace in spending his last moments with his family. In Dr. Kalanithi’s perspective, “Even if I’m dying, until I actually die, I am still living.”

Through the journey of this book, readers are confronted with the reality of living and the hard truth of everything being stripped away from what they have only known. The book spans past his role as a doctor to a husband, where there were moments of strain as he and his wife endured residency. It is grappling for readers as they step into a world of juxtapositions – life and death, family and work, doctor and patient.

While the book has an abrupt ending, it has an element of vulnerability laced into it. Such abruptness provokes a sense of urgency in Dr. Kalanithi’s story, as he races against a ticking clock to fulfill his dream of publishing a book. At a critical time where the healthcare system faces an intense nursing shortage, Dr. Kalanithi provides insight on the meaning of entering medicine with a purpose to care. His work is a lasting read for medical students and doctors, as well as inspiration in the presence of life and death. The heartfelt, tear jerking epilogue, narrated by Lucy, recounts the final months of Dr. Kalanithi’s life. As Lucy put it, “What happened to Paul was tragic, but he was not a tragedy.”