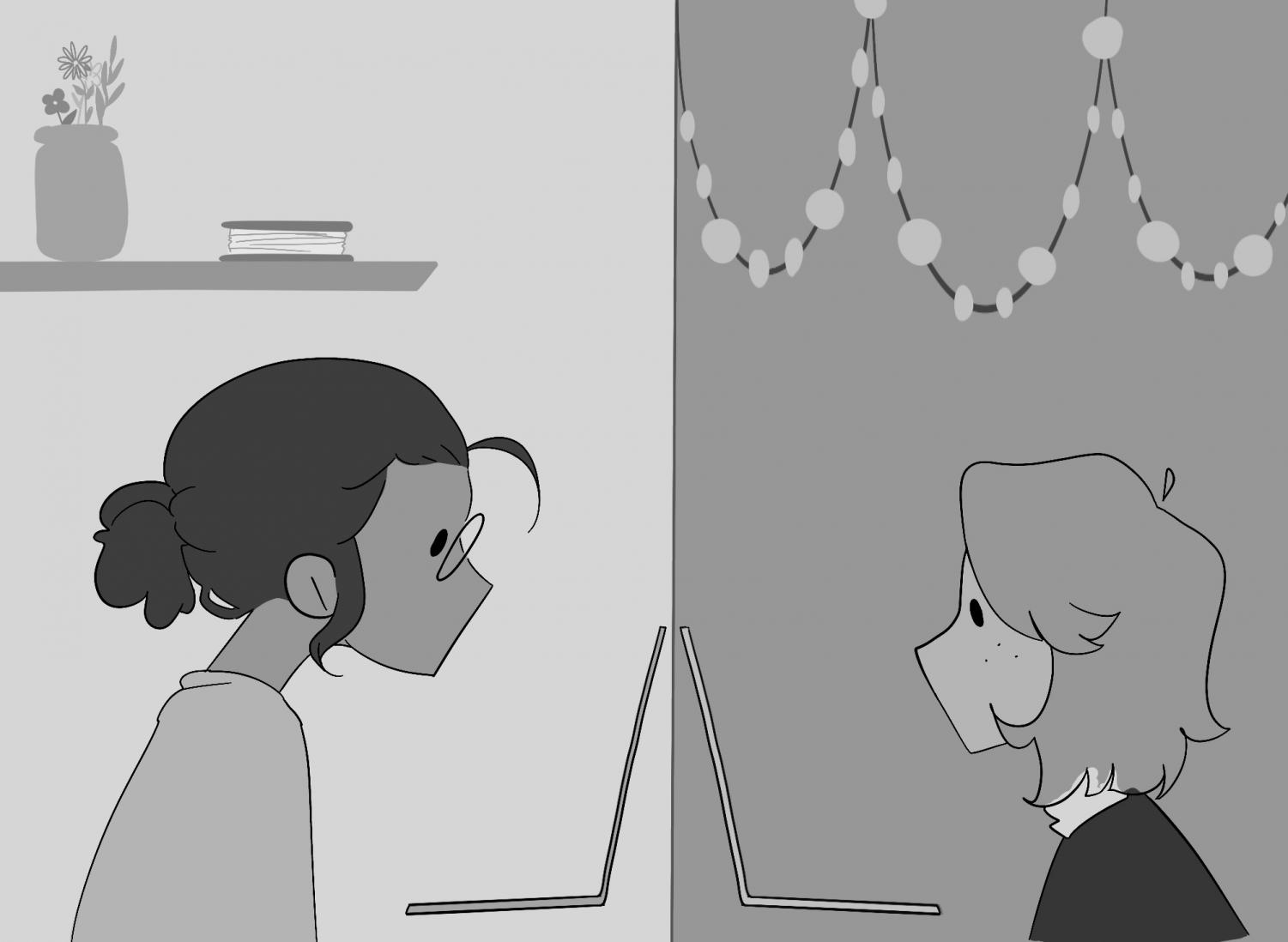 DISTANCE LEARNING: Students and teachers reflect on the first semester of distance learning

Every weekday morning, students wake up to the light of their computer screens and take a seat in their virtual classrooms. As SCHS students enter their second semester of school online, some are reflecting on the difficulties they faced during the first semester and are evaluating new changes.

The first day of the new school year started off on an exciting note for many students, like senior Stephanas Avila, who had a positive experience at the beginning of distance learning.

“It went pretty smooth most of the time,” Avila said. “A lot of the students were participating. We were kind of excited to see each other back even though it was through a virtual setting.”

Many teachers worked out the logistics of online instruction in the first semester, but some resources they relied on during in-person learning were difficult to revive. Avila said she has had trouble getting help.

“I would sign up for student support hours, but I would see other students also sign up for that, and they would have little slots and it would be all taken up,” Avila said. “If there was an available time, it would already be too late because it would be like a day after the test.”

Avila added that the disconnect between her and the other students in her classes made it troublesome to reach out to others. Even in breakout rooms, she experienced difficulty when attempting to ask her peers clarifying questions.

Some students, such as sophomore Yenith Cuevas Blancas, found their online classes less engaging as the months passed.

“My experience with online school last year was sort of like a roller coaster. I first was excited because I got to be home and be relaxed, but then the deeper we got into the semester, the more work started to pile up,” Blancas said. “Over the months, I’ve started to realize that my motivation to pay attention in class started to fade.”

The growing lack of student engagement during distance learning was a problem that many teachers faced and hoped to resolve second semester. Some now require students to have their cameras on as part of their grade, while others picked up the rigor in their coursework. Avila understands her teachers’ positive intents but expressed how such changes have resulted in more stress for students.

“They’ve been giving more assignments so that they can keep their students engaged, which keeps you more alert,” Avila said. “But at the same time, it’s like, ‘Oh, did I forget about an assignment? Is there a secret assignment that I didn’t do? What’s that due date for that?’”

Students have also noticed that some teachers are less effective virtually.

“I like online learning better for hard classes, but some teachers are better in-person, like (String) Orchestra and calculus class, so that my teachers can teach better with a whiteboard instead of having to write slowly on Jamboard,” senior Justin Whang said. “We just have to be patient.”

Whang, however, enjoys some recent changes to online classes, such as Google Meet’s breakout rooms.

“The access to breakout rooms is more convenient where our teachers decide to put us in random groups,” Whang said. “In that way, I can meet other people. It’s also better than having to open another tab.”

As students return from winter break, many anticipate positive changes in both their classes and their daily habits for a better-adjusted second semester.

“I hope for the second semester that there can be maybe more self-paced classes,” Blancas said. “And I hope for more self-care days when we have a day off and relax from school.”

“We all thought it was a temporary shut down, but obviously it ended up being the rest of the school year,” Estes said. “It was hard to make everything work online and digitally with so little notice.”

According to Estes, working online full-time for the first semester of this 2020-2021 school year was a little rocky, but overall a more positive experience.

“I feel like starting school in distance learning was hard because I didn’t know any of my students. It’s been hard getting to know everyone through a screen,” Estes said. “However, I did feel more prepared for teaching and took what I learned from March and used that to turn normal in-class activities into online versions.”

After realizing in the first semester that students can become overwhelmed with all their assignments, Estes has tried to alter her teaching style this semester to accommodate.

“I am going to do my best to cut back on homework and try to do more things in class together. A lot of students expressed they were overwhelmed and stressed because of the workload from all their classes,” Estes said. “I learned that things take a lot longer digitally to complete then if we were in class. It’s better to go slow and not rush things.”

Spanish teacher Amanda Vrabel has found new ways to foster student participation after seeing how breakout rooms can be problematic.

“I noticed things that weren’t working,” Vrabel said. “I’ve been trying this with the breakout groups: If you just are the person that absolutely is not going to speak to a partner … let’s stay with me, and I’ll give you some kind of practice, whether it be in the chat or some other way.”

Vrabel is still adapting, taking her classes one day at a time.

For English teacher Lindsey Couto-Mohamed, directly asking her class what she can improve on has helped her adapt to distance learning.

“I got feedback from students like I always do from a mid-year class evaluation. Some of the changes I’ve implemented are stable workgroups rather than the randomized breakout groups I’d used (in the) first semester,” Couto-Mohamed said. “So students are able to build a comfort level and familiarity. I also have had students keep their cameras on as long as their internet allows for it.”

Like Couto-Mohamed, Therapeutic Program teacher Alex Chavarria found that looking back on previous semesters is beneficial.

“Learning from the spring semester of the previous school year helped.” Chavarria said. “(There are) always areas to improve in.”

With experience, both Chavarria and Couto-Mohamed have come to understand the realities of distance learning and acknowledge the difficulties their students face.
“I completely understand that for some students, technology issues, loud environments with working family members or siblings, and even simply personality types make speaking in class challenging, and I don’t fault them at all, but when the norm became to type all responses, it was a bit demoralizing as a teacher,” Couto-Mohamed said. “That’s improved a bit since students having their cameras on became the norm, but I’d love for students to bring the level of energy to class that they want me as a teacher to have.”

Chavarria is understanding of the situation that COVID has brought upon both students and teachers.

“I understand how difficult it is to learn in this environment. This platform is not conducive for learning, and I empathize with my students.” Chavarria said. “If we all work to communicate together, we can try to make this experience a positive one.”